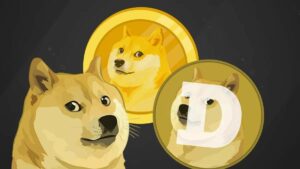 Last February, the crypto community was captivated with a specific dogecoin address, which now holds over 36 billion DOGE and is the largest dogecoin holder. After looking at a lot of on-chain transactions, one amateur detective came to the conclusion that the wallet was controlled by the business Robinhood. Now the person claims to have done more study on the subject and that the current discoveries support his assertion that the dogecoin wallet belongs to Robinhood. In addition, the source believes Robinhood is in control of the third-largest bitcoin wallet.

According to Onchain Research, Robinhood not only owns the enigmatic Doge Whale wallet, but also the third-largest Bitcoin wallet.

He wrote about the subject in February, when the “DH5” address became a hot topic. Andrei detailed how onchain analysis led to this conclusion in a r/dogecoin Reddit post, claiming that findings suggest the corporation Robinhood is the owner of the “DH5” dogecoin address.

The online brokerage firm Robinhood had an initial public offering (IPO) this week, and in an interview on May 6, the company’s CEO Vlad Tenev discussed the firm’s crypto positions. According to Tenev’s remarks at the Robinhood fireside chat in May, the exchange supposedly only gave consumers access to their specific assets.

Andrei’s study not only links the “DH5” dogecoin address to Robinhood, but it also reveals that the exchange is likely the owner of a lot of huge wallets containing coins including BTC, ETH, and BCH. According to Andrei’s findings, the company Robinhood purportedly controls rich-list wallets from six major crypto assets.

Notes on the Report Robinhood is most likely the owner of some of the wealthiest addresses across five different blockchains.

Andrei explains why Robinhood is suspected of being the owner of not just the “DH5” dogecoin address, but also the third-largest Bitcoin address “1P5” on Reddit.

Furthermore, Andrei wonders if, if Robinhood uses the same cold storage strategy for BTC and DOGE, “wouldn’t it also make sense for them to use the same strategy for the other 5 Cryptos that they provide for trading (ETH, LTC, BCH, ETC, BSV)?” All of the aforementioned coins, as well as “the top rich addresses belonging to Robinhood on various blockchains,” according to the armchair sleuth.

The bitcoin (BTC) address beginning with “1P5” has accumulated 113,842 BTC since February 2019. Coincidentally, the DH5 dogecoin address and the “1P5” bitcoin address both began accumulating at the same moment.

Andrei’s report says, “With over 2 million ETH, it was seeded in exactly the same manner.” The Redditor also provided an article that explains why the wealthiest crypto addresses are still crucial.

“As a custodian for RH crypto clients, Robinhood (RH) controls more BTC (116K) than Microstrategy (105K),” the Redditor concluded. “Overall, 10 million crypto Robinhooders are savvy money, heavily purchasing the bitcoin and crypto drop since the May crisis. “Wallets are urgently needed to provide millions of RH investors the flexibility of self-custody,” the investigator noted.