‘Sabrina’ Chromecast Device available in US ahead of launch

Google’s ‘Sabrina’ Chromecast Device is available for purchase in the US ahead of its launch. People are purchasing the device from Walmart and Home Depot. Reports say that these places and sites are selling the pre-released products openly and aren’t doing anything to stop buyers.

According to some reports, a Reddit user was able to get his/her hand on the released ‘Sabrina’ Chromecast Device from an offline Walmart Store. The report also said that the device is not available everywhere. And when the product code from the receipt is used on the retailer’s website, nothing shows up. Verger’s report said the device was listed as “SABRINA-ABBEY ROCK CANDY” in the receipt, which is the device’s code name.

The reports also say that the new Chromecast is powered by an Amlogic S905X2 chipset clocked at up to 1.8GHz and combined with an ARM Mali-G31 MP2 GPU and 4GB of RAM. It will also support 4k streaming at 60 fps, HDMI 2.1, HDR video, and Dolby vision.

Other details about the purchase reveal that the new Chromecast will be priced at $49.99. It is also  rebranded to be called “Google Tv” instead of “Android Tv.” Google has also introduced a new color called the “snow,” which is just a better white name.

Why is the Chromecast available before launch? 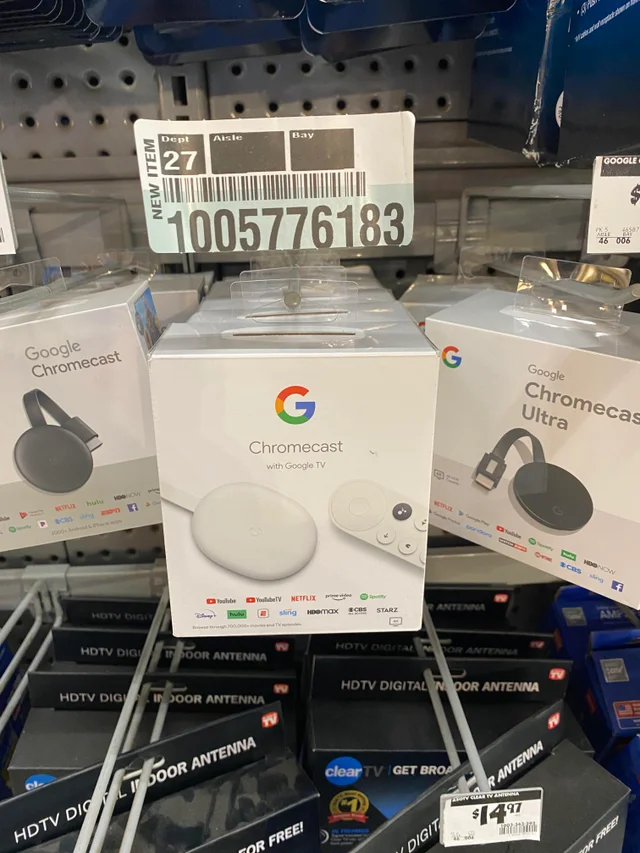 Google is going to announce the new Chromecast with its pixel lineup today (30th September). But, we aren’t exactly sure of the reason why the device is available in the US before the launch. Google has also refrained from commenting on the same when asked by “The Verge.” But, it is sure that any hype regarding the device’s launch that remained is gone.

Though, I am not entirely sure this move of making the Chromecast available before launch might be a strategic move by Google. They might have thought this will boost their sales as people will start talking about their devices. So, it kind of free marketing for Google. Let’s see how they price the device and how soon it comes to India. Dave Zatz tweeted out the photo you see here.

Have you ever used the Google Chromecast, or are you planning to get one? Do let us know in the comments below. Also, if you found our content informative and interesting, do like and share it with your friends.

Also Read: Microsoft 365 suffered a major outage: Outlook and other services went down