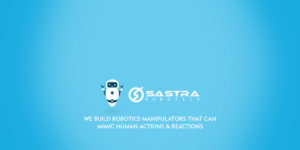 At TechStory we are currently doing a series on Robotics. We are talking about how robots going to be more omnipresent in the future and how they are making waves right now.

In this segment, we are talking about up and coming robotics startups in the country. These different startups have look at robotics through a different perspective and have found their niche. The Indian robotics startup ecosystem has now found their specialization and the industry is getting the consumer market it deserves.

In today’s article, we will be talking about a company named Sastra and what they are doing to take the field of Robotics forward.

What Does Sastra Do?

According to the website they say and we quote,

“We build robotic manipulators that can mimic human actions and reaction.”

Simple right? They build machines that can do the same jobs humans do. But there is so much more to this.

First of all, the primary jobs of robots are to mimic or recreate human actions in some form or the other. Be it emotional replication or physical replication or mechanical replication. A robot will either clean,  screw, drill, assemble, or do a lot of tasks that humans could have done otherwise. But robots do it much much more efficiently.

But what sets Sastra apart is that the company has aced the game. They have become the best of the best in the short few years since the company’s establishment. They have a 3 approach to robotics- from design to software which has made them the one stop shop for robotics.

Another thing is that Sastra doesn’t take pre-existing robots and makes their own version of it.  They are committed to unexplored designs and applications of robots.

“Each of Sastra’s products are conceptualized and created after extensively researches & testing made on clients’ needs in solving their problems. Based on this approach, Sastra derived innovative ideas targeting head-on solutions to any problem. The true sign of intelligence is imagination.”

Most of the products of Sastra work as interfaces between machines and humans also know and Human Machine INterface machines (HMI).

“We aim to develop and market novel and high-end robotics technologies for a wide range of applications aimed at the welfare of humanity. We believe that the coexistence of humans and intelligent machines are the next step of evolution.”

Here are some of their featured machines:

Servos are machines that help in servomechanisms. A servomechanism is a ” powered mechanism producing motion or forces at a higher level of energy than the input level “.

For example, in an electric steering wheel, a small turn on the wheel makes a turn of a much larger radius.

Sastra produces such servos for various machines like the HerkuleX DRS-0101.

WeBot is a robot simulator. It can recreate situations or settings where model robots and their functioning can be tested.

For example, in self-driving cars, before a car is taken on the road (even if it is for tests), a road is stimulated and a model car drives through it and the performance of the car is measured.

The e-puck is a mini mobile robot which is not originally created by Sastra is but is developed from a design that was made open source by some teachers. It provides primitive levels of robotics functionality like sensors and actuators, including two stepper motor wheels, 9 LEDs, a speaker, 8 infra-red sensors, 3 microphones, a VGA camera, a 3D accelerometer, a remote control IR receiver, a 16 position switch and a Bluetooth interface which can be used by students to learn.

Along with these products, Sastra also focuses on research the development of new designs and for the same reason, it has opened a ‘Robotics R&D and testing facility’ in Kochi.

Sastra was founded by 3 college friends, Aronin P who is now the CEO, Achu Wilson- the CTO, and Akhil A- the COO of the company.

The began the vision for the company at a Startup Village in Kochi.

“Our vision is to build a perfect robot companion for humans. It’s a time-consuming task, so initially, we are concentrating on robotic arms, vision and artificial intelligence,” says Aronin P, 29, chief executive at Sastra Robotics.

Sastra through its run has also won various competitions and events. Some accolades it has received include the Humanitarian Robotics Challenge-2016 conducted by IEEE International Conference on Robotics & Automation in Stockholm, Sweden and the TiE50 Award by TiE Silicon Valley in 2017.

Sastra is a private company that is located in Kochi and is currently a private, for-profit venture. Its current competition includes the company GreyOrange and Systemantics which is backed by Infosys founder Nandan Nilekani.

No public or updated information was available to us for the funding of Sastra.

Sastra is focusing on much more than just robotics. It is staying on the edge, developing new tech and looking out for the future because it knows how volatile this industry is.

With 5% of investor funding going into the field of robotics the folks at Sastra know that if they do not stay on their toes they might just fall behind. But their current growth is happening at an unmatched pace and the company hope to accelerate even more.