Robinhood announced a big drop in revenue for the third quarter, due to a decline in Bitcoin trading. As noted by Robinhood, the issues that caused the company to struggle last quarter, including lower retail trading volume, would persist through the end of the year, barring any changes in market conditions. 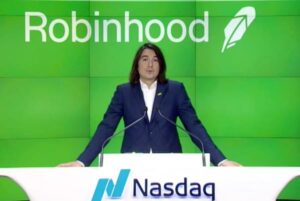 Shares of the newly public company plunged by 8 percent after hours. The company’s third-quarter net revenue was 365 million, missing Refinitiv’s forecast of $431.5 million. In the third quarter, revenues increased 35 percent year over year, but they were still far below the $565 million in the second quarter, which was helped by a surge in cryptocurrency trading.

Transaction-based revenue was $267 million in the third quarter, with Bitcoin trading contributing only $51 million. The demand for meme-inspired Dogecoin boosted crypto trading revenue to $233 million in the second quarter.

“Q2 was one of those unusual market situations,” Robinhood CFO Jason Warnick told CNBC. “When those moments happen, we love it. It’s an excellent technique to attract a large number of new clients to the site. However, we are really considering investing in cryptocurrency in the long run. So, to be honest, it’s going to be impossible for us to precisely anticipate revenue on a quarter-by-quarter basis”.

Revenue per user dropped by 36 percent to $65 from $102 over the past year. Robinhood reported a $1.32 billion net loss or $2.06 per share. Wall Street was expecting a loss of $1.37 per share, according to Refinitiv. Share-based compensation costs totaled $1.24 billion in the third quarter of 2021.

“This quarter, we focused on providing new goods and services for our users, including crypto wallets,” said Vlad Tenev, Robinhood Markets’ CEO and co-founder. “Over one million people have already signed up for our crypto wallets waitlist,” says the company.

In a news release, the company stated, “We expect many of the factors that impacted our third-quarter performance, such as seasonal headwinds and decreased retail trade activity, to persist for the three months ending December 31, 2021”.

Robinhood went public in July, with a share price of $38. On Tuesday, the stock closed at $39.57 per share

If you find this article informative then do share it with your friend and family!