The Dow Jones Industrial Average dropped 650 points in one day at the end of November. Other American markets, for the most part, quickly followed suit. Investors reviewed the dangers linked with the new Covid version, omicron, on Tuesday, dampening Monday’s rebound on Wall Street. 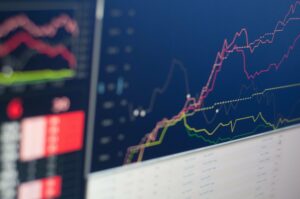 “At this point, the economy is very strong, and inflationary pressures are higher, and it is therefore appropriate in my view to consider wrapping up the taper of our asset purchases … perhaps a few months sooner,” Powell said. “I expect that we will discuss that at our upcoming meeting.”

This fall is often attributed to growing fears about the economy’s impact from the Omicron variant of the coronavirus, but it’s also likely linked to rising inflation rates, supply chain uncertainty in the face of the holiday season, and other lingering economic difficulties.

It’s understandable that both serious and casual investors are concerned about the value of their stock market holdings. These types of economic cycles, particularly the present prospective downturn, are prompting an increasing number of people to consider cryptocurrencies as a means of weathering the financial storm.

In reality, the percentage of Gen Pop who invest in Bitcoin (or would if they could) as a long-term growth investment has climbed from 23percent to 30percent in the previous six months, while those who invest to avoid severe economic situations has also risen from 9percent to 16percent. All other factors are on a decreasing or flat track.

The Bitcoin markets’ pre-Christmas sell-off frightened investors, lowering their risk appetite. As investors risk off their holdings, the virtual currency market became the latest to succumb to the selling pressure.

On the basis of profit booking and fears, major cryptocurrencies, including behemoths like Bitcoin and Ethereum, lost up to a fifth of their value, resulting in roughly a billion dollars worth of selling across cryptocurrencies.