Snapchat gets in trouble for its “Speedometer” filter, removes it! 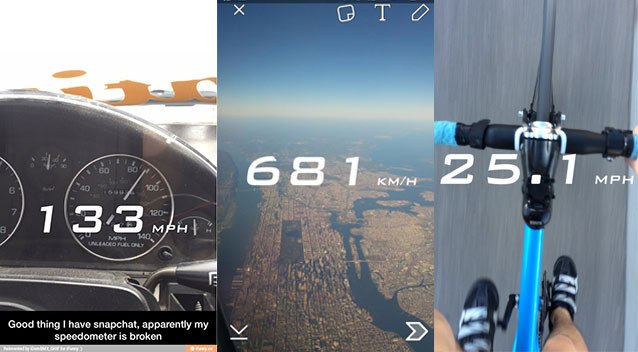 Snapchat is a prevalent social media platform that is used by millions of people across the globe. The app is more of a closed connection social media platform as opposed to Instagram’s more comprehensive reach. Still, slowly and steadily, Snap Inc. is moving towards monetizing its creators to lure more people on the platform.

Snapchat is a unique platform that leverages the power of Augmented Reality by creating innovative filters for its users which is loved by Snapchat users and is considered as one of the app’s Unique Selling Points. Recently, one of Snapchat’s unique filters has caused Snap Inc. to get into legal trouble, and following the controversy, the company has removed that filter from Snapchat.

The controversial filter is the “Speedometer” filter which shows a Snapchat user’s speed in real-time and allows them to share their speed via Snapstreaks and Snap Stories. The filter was introduced on the platform back in the year 2013 and safety campaigners claim that this filter encourages reckless driving by users which has caused multiple road accidents in the past.

According to a report by Engadget, a spokesperson from Snap Inc. told NPR that the filter is used in a few thousand snaps every day which is a significantly small number from the total of more than a billion snaps shared every day. A company spokesperson mentioned in a statement to Engadget that nothing is more important than the safety of their Snapchat community. He further added that the company had previously disabled the filter at driving speeds and today, the filter is barely used by Snapchat users. Thus, in consideration of safety concerns, Snap Inc. has decided to remove the filter altogether from Snapchat.

However, Snap Inc. has known about these safety concerns and before removing the filter permanently from the platform, the company tweaked it into a sticker to avoid unwanted attention. Other than this, the “Don’t Snap and Drive” sticker appeared every time a user tried to use the “Speedometer” filter at driving speeds.

The controversial news tied to the Snapchat filter involves multiple car crashes over the years, some of which included fatal accidents. This level of negligence of using Snapchat while driving is mainly related to teenage drivers who are the most active Snapchat users.

Anyhow, Snap Inc. has finally removed the controversial “Speedometer” filter altogether but before they did that, the company limited the top speed that could be captured and shared around on Snapchat to 35MPH, as reported by Engadget.