Snoop Dogg, the rapper and comedian, dropped a bombshell earlier this week. He admitted that he is the guy behind Cozomo de’ Medici. Cozomo de’ Medici is a crypto Twitter personality and serious NFT collector with an Ethereum wallet full of collectables worth more than $17 million. He’s now plunging headlong into the crypto-metaverse. 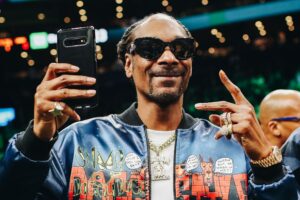 Snoop Dogg has announced a partnership with The Sandbox. It’s an upcoming Ethereum-based metaverse game that allows users to modify and share 3D experiences.

In the game, Snoop will have his own custom-themed world. Complete with a mansion, playable Snoop avatars, and plenty of marijuana-themed artwork. There will be more NFT drops in the future. As well as an in-game concert, as seen in the trailer below.

On Wednesday, Snoop teased the announcement by telling his Twitter followers to “Follow the pocketbook”. The Snoop Dogg Private Party Pass is an NFT produced by The Sandbox. It was discovered in the Cozomo de’ Medici wallet on the OpenSea marketplace.

Only 1,000 NFT party permits will be available. With 650 of them accessible for purchase on The Sandbox’s marketplace. The remaining 212 will be given away during airdrops to those who acquire LAND plot NFTs from the next Snoop LAND sale. On his Cozomo Twitter account, Snoop has already given out a few.

“I’m constantly looking for new ways to communicate with fans. And what we’ve constructed in The Sandbox is the future of virtual hangouts, NFT drops, and exclusive concerts”. Snoop Dogg said in a statement. “We’ll have a new collection of Doggy-style NFTs that users may incorporate in-game sessions. This will definitely take this online experience to the next level,” the developer says.

Many organisations and creators have partnered with The Sandbox. Which includes The Walking Dead, Atari, Gemini’s Winklevoss Twins, and the legendary Bored Ape Yacht Club NFT collection. The Sandbox hopes to launch a public alpha test for people this year. To get a first look at the 3D areas. Which LAND NFT owners can personalise, sell, and share with other players.

An NFT functions as a document of ownership for a valuable digital asset—in this case, a rare digital item.

bncase, one of 1,000 passes to a private party planned within The Sandbox’s game environment, and 3D avatars that users may operate within the game NFT Revisions.