Snowflake stock jumped after the software maker reported a narrower-than-expected loss for the third quarter while revenue blew past estimates. January-quarter guidance for SNOW stock also came in above expectations.

Snowflake Inc.’s revenue more than doubled in the latest period and the cloud-computing-services company issued a bullish outlook, cheering investors.

The Montana-based company, which went public last year and has yet to reach profitability, posted revenue of $334.4 million on Wednesday to generate a net loss of $154.9 million, beating Wall Street expectations.

Snowflake stock reported a loss of 51 cents a share using generally accepted accounting principles compared with a loss of $1.01 per share a year earlier. Analysts expected the company to report a loss of 60 cents. Snowflake stock does not break out adjusted earnings in its earnings releases.

Snowflake stock gained 9.2% to 339.70 in morning trading on the stock market today. SNOW stock had surged over 15% initially on the earnings release.

In Wednesday’s regular session, SNOW stock fell 7% amid a broad market sell-off. Snowflake stock had gained 12% in 2021 heading into the earnings report.

The provider of cloud-based data analytics software said product revenue rose 110% during the quarter to $312 million, compared with estimates of $284 million. 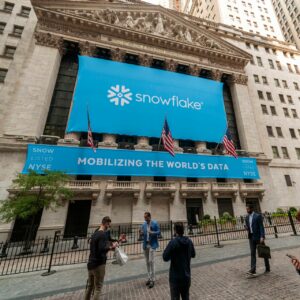 Snowflake, whose investors include Warren Buffett’s Berkshire Hathaway Inc. and Iconiq Capital LLC, an investment firm that manages money for some of the most prominent people in Silicon Valley, also has set high expectations for itself. The company in June said it would hit $10 billion in product revenue in its 2029 fiscal year.

“The 10% revenue beat was the largest since its IPO & Q4 guide was well above, all while SNOW stock hit a milestone of positive operating margin,” said Cowen analyst J. Derrick Wood in a report.

In addition, Snowflake said it now has 148 customers with “trailing 12-month product revenue greater than $1 million,” up from 116 such customers as of July 31.

For the current quarter ending in January, Snowflake forecasts product revenue in a range of $345 million to $350 million, topping estimates of $316 million.