With the weekend approaching, traders are hopeful that the recent bearish incident would fade away swiftly. The global cryptocurrency market lost nearly 11% of its total capitalization in a single day, and the main coins in the ecosystem bled profusely. Despite the difficulties that other crypto projects are now experiencing, Solana continues to grow and expand, overcoming all obstacles in its path. According to Coingecko data, the promising blockchain has outperformed the top ten cryptocurrencies in terms of price-performance during the last seven days, raising its value by 86.9%. This is enough for SOL, Solana’s token, to leapfrog XRP and seize the #6 slot on the cryptocurrency ranking for the first time. 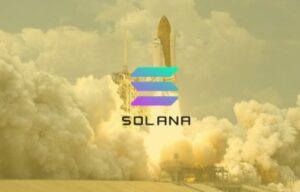 To The Moon And Beyond by Solana

Solana’s price is surpassing all forecasts, according to the charts. Since the beginning of August, its advance has been practically parabolic, with larger weekly candlesticks. The most recent weekly candle (which is now forming) shows a nearly 48 percent increase. SOL started the week at $141, and it is currently trading at $208.

Naturally, indicators imply that the token has reached its most overbought point in history, thus taking a long position should be done with prudence. For the time being, strength indicators like the ADX indicate that the coin is extremely bullish. XRP, on the other hand, has not had a good week. Aside from heading in the direction of Bitcoin, the legal issues haven’t helped it much. 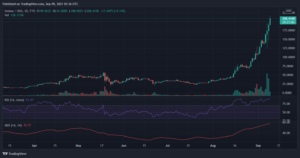 XRP experienced its biggest price decline since May on September 7, 2021. It dropped from $1.38 to $1.12, losing more than 18% of its value. The following days were likewise bearish, and each XRP coin is currently trading at around one dollar per coin. This crash influenced the movement of cryptocurrencies up and down the rankings.

Solana was able to flip Dogecoin just last week, which was already impressive given that it is a new project that only made the Top 10 last month. Solana has reached a crucial milestone by strengthening its position over XRP. The rapid surge demonstrates the confidence of speculators and investors in the token’s long-term value appreciation.

However, the gain also demonstrates the blockchain’s strong fundamentals. Because of its excellent efficiency and scalability, it is currently gaining favor among top dApp developers. Degenerate Ape Academy, an NFT collection, picked the blockchain over older competitors such as Ethereum. In addition, the total volume locked on Solana-based DeFi devices reaches $7.5 billion.

If  You find this article informative then do share it with your friends and family!