South Korea’s new pedestrian lights, which are designed to help people whose eyes remain glued to their phones as they walk, are drawing divided opinions. A viral TikTok, which apparently features the country’s capital, Seoul, shows how the city has come up with new LED lights, which change color from red to green in order to indicate that it is safe to cross.

A Much-Needed and Cool Innovation, Or a Push towards Carelessness?

The clip, which has been shared by TikTok user @naturalkorean, the streets have been installed “on the floor” (pavement), so that people can check them while continuing to stare at their phones, without the need to even lift their heads up. The video has already amassed over two million views on the platform.

While some say that the tactic is a simple one which can prove to be effective in preventing people from mindlessly walking right into traffic, many others have taken issue with the innovation. They seem to be miffed about the fact that the country has had to resort to such measures simply because people can’t get enough of their mobiles. One user has commented that it’s unbelievable how many care “about their devices more than their life.” 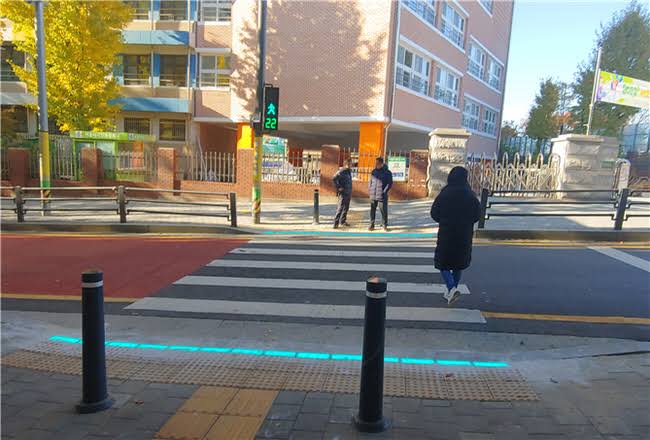 Some have even lauded the move, while saying that it sets an example regarding the way “society should work.” Others have also admitted that the new pedestrian lights could actually prove to be useful, especially for people who cannot see well, and apparently, also for people who have social anxiety or are introverted.

Then there’s also those who are calling the South Korean government out for allegedly “normalizing” using phones while walking, claiming that the move is “not okay at all.” Still others find the whole scenario “cool but sad.”

A Necessary Move to Prevent Accidents

News outlet E&T has cited Korea Institute of Civil Engineering and Building Technology’s Kim Jong-Jong-hoon, who has said that these lights (which have been dubbed “zombie lights”) are key to tackling the growing number of smombie (smartphone zombie) accidents that are occurring at pedestrian crossings. He’s not wrong, as pedestrian accidents actually are quite a problematic issue in South Korea.

From the 218 road traffic accidents that occurred in the Asian country last year, 115 involved the deaths of pedestrians. In 2018 as well, there were a total of 247 deaths from such accidents, while in 2014, there were some 399 such incidents.