SpaceX takes up the spotlight on Twitter following the launch of its first all-civilian mission to space. 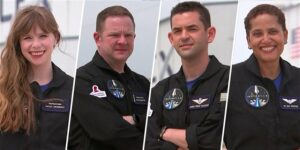 SpaceX once again becomes the talk of the Twitter town following the successful launch of its very first all-civilian mission to space. It seems like the space exploration company is determined to achieve milestone after milestone with renewed vigor. Missions like these break down the wall that had barred space exploration for non-astronauts making it possible for normal civilians to explore and experience space. However, let us not forget that this might not be the cup of tea for every civilian out there since embarking on such a journey will cost a fortune. Although it seemingly breaks down the inherent elite element of space travel, it does put forth a division as to who can avail this prerogative. All said and done, it cannot be denied that this all-civilian mission is a rather big step that breaks down boundaries and magnifies the scope of space exploration and travel.

Wednesday marked the day of the milestone mission when SpaceX launched four private citizens to space, thereby holding the record of being the very first crewed mission without any professional astronauts. The mission aptly called “Inspiration4” can be counted as the first major step towards normalizing space travel for civilians aka paying tourists. The mission was carried out by Falcon 9, and onboard was the crew that consisted of four civilians. The crew consisted of the founder of Shift 4 Payments, Jared Issacman, who is also a billionaire entrepreneur and a trained pilot. Issacman chose and paid for the rest of the crew namely Hayley Arceneaux, Christopher Sembroski, and Sian Proctor. Arceneaux is a cancer survivor and physician, Sembroski, a data engineer, and Proctor, a geoscientist, in addition to being a former NASA astronaut candidate. Apart from being the first all-civilian mission to space, Inspiration 4 also serves as a fundraiser for St.Jude’s children’s hospital. Although the amount paid by Issac man for the crew is not revealed, speculations and estimates point to a sum of about $55 million.

The mission is designed to be more of a tourist model in contrast to the trips of NASA astronauts who adhere to a more professional model. The crew is also packed with activities. And we can expect to witness some ukulele playing by Sembroski and some poetry and art by Proctor. The mission is spread over a course of three days and the exact time when the capsule will reenter the earth will be determined by the weather conditions around Florida costs.

Congratulations to @ElonMusk and the @SpaceX team on their successful Inspiration4 launch last night. Another step towards a future where space is accessible to all of us.

“The all-civilian Inspiration4 astronauts are paving the way for a future where space is more accessible to all who wish to go, and we are so proud that they entrusted us to fly them."https://t.co/2H1uPXOL52

The ISS flew right over us after Inspiration4 launched, which means I've seen 11 spacefarers in the sky tonight. Not bad.

This was a cool moment before the crew went up the launch tower:

Our final update of the SpaceX Inspiration4 launch story — the crew reached space and is now embarking on their three-day trip in orbit: https://t.co/S47lpS5kBV