Status Price and Everything You Need to Know About it

According to the whitepaper, Status aspires to be the first decentralized messaging platform to reach the West or emerging countries. Status links directly to the Ethereum network using the messaging feature as a platform, according to its permissionless, decentralized, and trustless principles.

Social bots are a type of automated software that manages a social media account, advocates for specific points of view, promote campaigns, and influences public opinion. These social bots are becoming more popular these days. These bots, however, taint online arguments by giving their messages phoney credibility and influencing people. Status seeks to address the issue of social bots and media manipulation through the use of decentralized technologies based on the Ethereum blockchain.

By employing the messaging-as-a-platform user experience, the Status mobile Ethereum client claims to provide a comfortable and well-suited feel for mass adoption. Status is an open-source platform with no fees. Users’ rights are respected, and they have complete control over their data.

What is the significance of Status? 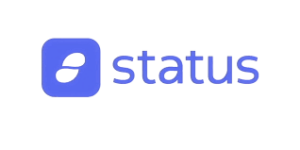 Status is crucial because it coexists with Ethereum, which is quickly becoming a key competitor to Bitcoin. Ethereum’s popularity stems from its superior technology and the fact that it allows other coins and tokens to operate on its network. Status employs SNT, which is one of the coins supported by Ethereum.

Carl Bennets and Jarrad Hope founded the Status Network. They provided funding for the project’s early deployment. The work on porting the Ethereum Java implementation to Android started in 2014. The initial idea was to create a DApps mobile browser (distributed and decentralized applications).

What exactly is it?

Status was created as a messaging software to ensure that people could engage with one another. This was based on a survey that found that more and more people prefer instant messaging to other kinds of communication. Furthermore, trends in the United States of America, and even globally, show that instant messaging apps have a bigger number of active users than social networks. Status intends to create a messaging network that will allow users to engage with smart contracts.

This will be accomplished by emphasizing Ethereum’s genericity and flexibility.

The following are the features of the initial release version:

Its goal was to ensure that there was a facility that allowed for encrypted communication via texting.
An Ether Wallet was also scheduled to be included in the version. It also includes something called Discover, which was geared for folks who might want to socialize. Discover was a hashtag-based search that allowed people to find other Status users, search for other D Apps, and share ideas and goods and services. Status allowed individual users to choose whether they wanted to keep their profiles hidden or discoverable in order to safeguard their privacy.

The initial version was also supposed to include a local P2P (peer-to-peer) Exchange function.

The Status Network Token (SNT) is an essential component of Ethereum, and it has its own value. It is the source of the network’s power.
The SNT enables users to assess their digital wealth and its monetary value.

When using SNT, you have more control over the digital identities included within online accounts. Status has made it a policy that only people having SNT accounts will be given a username. This was done to prevent the formation of spam accounts, thereby ensuring that the entire network is populated with trustworthy accounts.
Badges are given to trustworthy accounts and are only given once users deposit SNT for their usernames. The badge will include information indicating the value or number of backers associated with the account.

SNT also allows users to vote on network changes that are proposed. A user’s decision token will be allocated on a 1:1 basis based on the number of SNT they have, but the user does not need to use their SNT to vote on a decision.
If a Status user needs someone to contact them from outside the network, the user must deposit a certain quantity of SNT with the stakeholders.

Where can I get SNT?

The Status Teller Network is a new feature that Status is developing. This is a service that will allow stakeholders to identify people in their area who are willing to exchange cash for digital assets.

That is, anyone with a smartphone will be able to purchase SNT money in cash. SNT is currently available for trade on Changelly, a service that facilitates cryptocurrency exchanges. Other websites that support SNT trading include Binance and Bittrex.

Status was planned to provide an Ether Wallet that would let users make transactions, examine transaction logs, and also include a QR reader and ETH storage. Status announced the Status Hardwallet beta version in November 2017. Users might use this wallet to store, transmit, and receive Ethereum tokens. NFC, or Near Field Communication, technology was used in the wallet to enable contactless mobile transactions.

A wired connection was no longer required as a result of this. It is a mobile-ready and open-source facility. The wallet works with three types of currencies: ETH, SNT, and ERC20 tokens.

Mining for SNT
Because SNT is a token based on the Ethereum blockchain via smart contracts, it cannot be mined.

The price movement of SNT

Around the last week of July 2017, the currency’s value skyrocketed. It reached a peak of around $0.086 before entering a period of calm during which the price progressively declined. By the second half of December 2017, the stock had begun to rise again, reaching a high of roughly $0.56 before falling again.

The price increased during the second half of December 2017 due to the fact that cryptocurrencies were trading at extremely high levels at the time. During this period, investor interest surged, and the general public became aware of this financial potential. This resulted in high demand for cryptocurrencies. Later, as interest diminished, the price fell.

The table with historical data shows that the price movements with SNT have been erratic and volatile. Furthermore, governments have banned or are in the process of outlawing cryptocurrencies due to the fact that there are currently no regulations governing cryptocurrencies. Some governments are considering general limitations on cryptocurrency. In light of such occurrences, it is unclear how much bitcoin values will rise.

Instead, when considering long-term investing, established avenues such as mutual funds should be considered. It is strongly advised to seek proven mutual funds that have demonstrated a good return on investment over time.

Investing a small sum each month in such mutual funds would yield a higher return than the risk associated with cryptocurrencies. 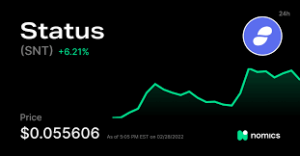 This week’s status is on the rise.