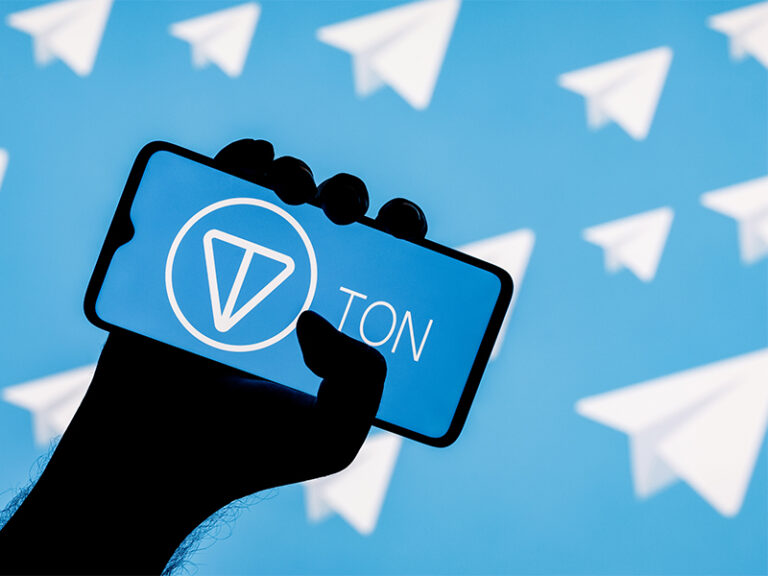 Kazan, Russia - Nov 14, 2021: The Open Network is a blockchain-based decentralized computer network technology. Smartphone with the TON logo on the screen in hand on the background of Telegram logos.
Home
Crypto

According to reports, The Open Network (TON), which is nothing but simply a decentralized blockchain, initially designed by the popular messaging platform, Telegram, announced this week that it would be adding a bot that would let Telegram’s more than 550 million users to easily send and receive cryptocurrencies via chat itself.

In other words, the TON Foundation announced on April 26 that this new feature of sharing virtual currency through its messaging app would soon be added, thus allowing users to send currencies to other Telegram users, that too without having to pay any sort of transaction fees.

Also, it is worth noting that, in order to access the feature, users would first need to opt-in via the said Wallet Bot, thus allowing them to easily buy cryptocurrencies through the exchange, bank cards as well as transfers to other wallets.

In addition to this, the company also says that, users can then send Toncoin (TON), a currency developed by the TON Foundation or even Bitcoin (BTC) to other users by just clicking on the ‘wallet’ icon in direct messages. Furthermore, as mentioned, Telegram is one such platform which is known to have a rather long history with cryptocurrencies.

In October 2019, a complaint was filed against the said messaging app by the U.S. Securities and Exchange Commission, just after Telegram managed to raise about 1.7 billion dollars through a private token sale. The SEC alleged that the Gram tokens were simply unregistered securities and as a part of the June 2020 settlement, the platform agreed on returning a sum of 1.224 billion dollars back to the investors.

As talked about previously, the TON Foundation was officially formed by members of the blockchain community who wanted to keep Telegram’s efforts with respect to cryptocurrency alive. As a matter of fact, Telegram’s chief executive Pavel Durov, announced in May 2020, that the company was planning on abandoning its blockchain project altogether after the said battle with the SEC.

During this whole process is when telegram handled control of the Telegram Open Network and Toncoin, which now is said to be the 105th largest cryptocurrency as per CoinMarketCap rankings with a valuation of about 2.83 billion dollars.

Not to mention, as per the announcements made by the said platform, those of you who are wanting to send Toncoin via the new wallet bot, which it proudly claims has been used by nearly 800,000 accounts on telegram since being enabled earlier this week, will have to install the latest version of the Telegram app. Also, know that, any developer can easily create such a bot with the help of Telegram’s open platform.

Apart from this, in a tweet announcing this feature, the Foundation said that “With this service, you’ll no longer need to enter long wallet addresses and wait for confirmations,”. Moreover, the feature is more or less similar to the Bitcoin payment functions that Elon Musk’s Twitter is known to be offering via its Tip Jar feature since September 2021.

Lastly, “It is hoped that this simplification of the cryptocurrency transaction process will enable greater adoption around the world, and help to embed blockchain payment solutions into people’s daily lives,” a TON Foundation spokesperson said in a press release, as covered in a report by Decrypt.

In conclusion, what are your thoughts on this new feature introduced by the Telegram app? Do let us know in the comments area below. To know more about various cryptocurrencies and NFTs, do check out other articles we have on our website. Thank you for your time & if you found our content informative, do share it with your investor friends!