Unveiled in 2019, Cybertruck could be best selling EV for Tesla in 2022 once deliveries start. In May 2021, the number of reservations increased to 1.2 million which is contradicting many critics saying Cybertruck is a flop. 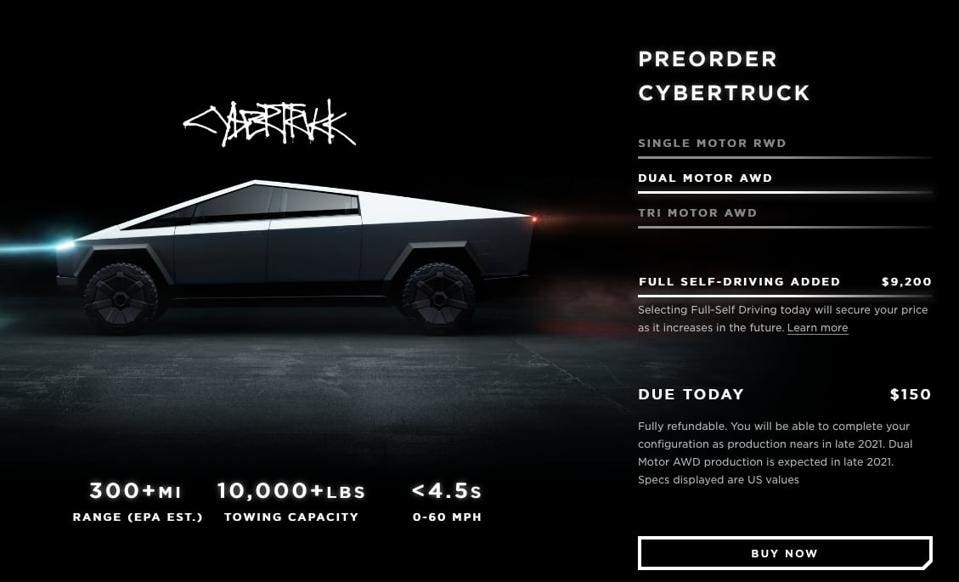 Earlier in May, Elon Musk announced that Tesla reached 250,000 pre-orders within a week of unveiling the vehicle. Currently, the sheet shows implied reservations made more than 2 million units. Furthermore, the value of the pre-order deposits is stated as $125,648,700.

Cybertruck starts at $39,900, which can go up to $69,900 or more according to personalization. Among the pre-orders, 7.28% were single motor truck reservations, 47.97% were dual motor registrations, and 44.75% were tri-motor reservations. The data published by Electrek in May and the current updates show a substantial change. Among the pre-ordered people 5,613 people are already known to have a Tesla or owned it earlier.

The company is planning to start production by 2021-end and possibly start deliveries sometime in 2022. Once Ford’s F-150 lightning was unveiled, it is estimated that Ford’s traditional look would beat Tesla Cybertruck’s futuristic look. However, potential customers are into knowing more about Cybertruck and how Tesla would possibly release the vehicle. Like recently, Cybertruck colors were teased in a game, PUBG Mobile. And the earlier updates include bulletproof solar panels at the back covering the bed of the truck.

As Cybertruck was spotted in Giga Texas, being driven by Elon Musk himself, it is known that Giga Texas will be making the truck. Additionally, in recent earnings call Elon Musk pointed out the increase in supply chain pressure. It is already announced that Model Y will be manufactured in the Texas factory. However, some media outlets indicate that Tesla needs to test drive the truck more and make sure it is fully ready for production.

Cybertruck making will need an 8,000-ton die cast machine from IDRA, an Italian manufacturer. As stated by IDRA General Manager Riccardo Ferrario in March, “Once again, IDRA makes a world’s first for technological innovation, and we are very proud to announce that today, on the 16th of March 2021, we’ve been able to secure the first order for an 8,000-ton die-casting machine. This order is being placed by a leading global manufacturer for new energy vehicles,”

Clearly, Tesla is preparing ahead to start Cybertruck manufacturing and is possibly yet to finish the final testing processes. Tesla is known for making its own component from its machines, already booked the giant machine to make its truck.