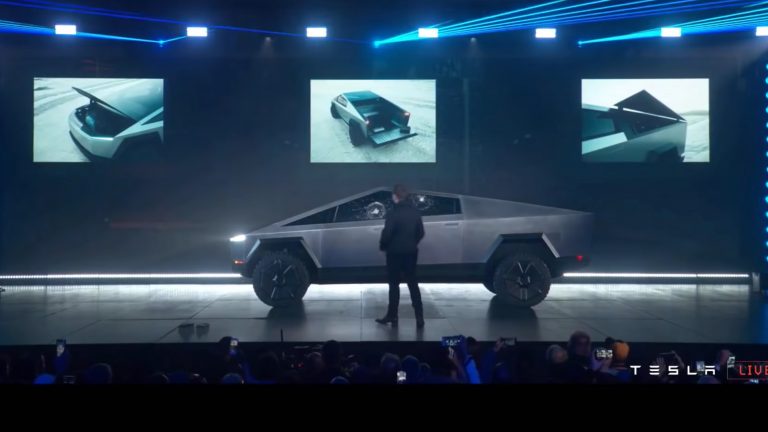 Tesla Cybertruck: Solar Panel And Bulletproof Armor Glass Patents The automaker has been applying to United Stated Patent Office for it's Cybertuck

Their designs are even more interesting as the bulletproof armor will protect the load at the back too. And the solar panels add an extra 15 miles per day to the mile range of Cybertruck.

The key factory for glass armor is a  tonneau or truck bed cover which covers the load behind with a touch on the button. As the patent submitted said, “Integrated Tonneau Cover for a Vehicle”.

The Cybertruck’s stainless steel is strong enough to endure several blows of sledgehammer without cracking. Often, there were many suggestions from potential buyers on improvising the back payload, one of which Elon Musk Replied as worth considering.

However, the glass armor for the payload is something pickup trucks don’t get and was much needed so owners do purchase additional equipment. It enhances further safety of the payload, making it a noteworthy purchase for various interested customers.

In 2019 when Cybertruck’s strength was demonstrated, Elon Musk proved that the glass material of Cybertruck was strong too. As this patent was applied, it became clear how the glassworks.

It is a multi-layer glass stack, which the inner layer chemically strengthened high strength in flexibility. And the inner layer measures about 0.5 to 1.1 millimeters thick. As it has energy absorptive properties, with an adhesive interlayer attaching itself to the outer layer, the strength sticks together. Furthermore, the outer layer is made of highly densified, low-CTE, non-soda lime glass. And measures about 2 thick. The further outer layer is about 5 millimeters thick made of boric oxide and silica. Additionally, it is also resistant to thermal shock.

However, the glass armor is not all with only advantages. It does take up space and limits the load space. But, as the cover can be used as a solar panel, then maybe the added feature is added benefit.

Will be an option to add solar power that generates 15 miles per day, possibly more. Would love this to be self-powered. Adding fold out solar wings would generate 30 to 40 miles per day. Avg miles per day in US is 30.

It was hinted at by Elon Musk back in 2019 itself. The solar panel is a potential concept for the Cybertruck as more space is available for flat panels. As the range is what matters for a truck, added mileage is a definite go-to concept. This is not possible with traditional electric cars, as that much flat surface is not available.