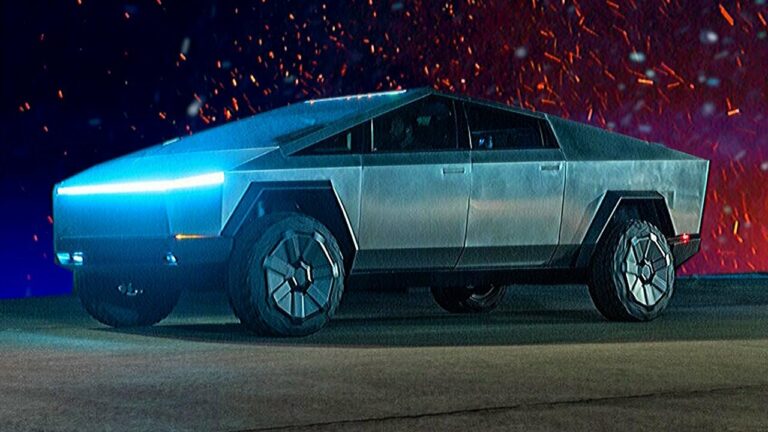 Tesla Cybertruck seems like a CGI in the new teaser footage

The hype for Tesla Cybertruck is piling up day after day. Even the initial production of Cybertruck is moved to late 2022, it has become the worth waiting vehicle. The recently released Cybertruk’s minute-long footage wooed the viewers and cannot believe and imagine the car is a real-life vehicle.

Electric vehicle advocate Harsimran Bansal recently shared a clip of Cybertruck online when he visited one of the company’s showrooms. In the teaser, Cybertruck looks insane in both urban and outdoor environments. While in the city it looks like a vehicle from the far distant future and while in the working environment like Giga Texas, it feels like home.

The teaser revealed the interesting scenes involving a pickup truck drifting around in a field And the Cybertruck’s design and the scene make it look like the Vehicle was CGI or a Miniature version of the truck that is being controlled by a remote in the backyard. The same happened with the scenes in Giga Factory Texas. It looked like an advanced alien technology in Sci-fi movies besides the heavy construction machines being used in the complex.

Elon Musk on many occasions commented on the Cybertruck. How it looks unreal and how the vehicle is basically a CGI in real life. The newly released teaser highlights his comments and took them beyond it. While watching the teaser, the viewers were continued to be in a dilemma state thinking about whether the vehicle is real or not. Once the production started, It would be quite interesting to see how the traditional drivers would react to the Cybertruck once it start running on the roads.

Earlier this month, A short video was shared online which hinted that Tesla testing an updated prototype for its futuristic Cybertruck. The Cybertruck was seen with a hulking body and a pair of side mirrors and the vehicle also looked like it was equipped with rear-wheel steering.

The Tesla Cybertruck created a significant image in the auto sector industry due it its design and brutalist look. The vehicle’s prototype was spotted several times in late 2019 since its unveiling but with no side or rearview mirrors. It made the Cbertruck more futuristic with a camera setup. However many countries don’t allow this vehicle’s camera setup.

Recently, one of the alpha Cybertruck prototypes was sighted while testing at the Castle Airport in Atwater, California from a distance. It was viewed that all-electric pickup truck was equipped with side mirrors which are removable as Elon Musk noted previously. And the updated Cybertruck also seemed to be testing its rear-wheel steering system.