Tesla faces decline in deliveries, hurt by Covid shutdown in China The EV company reported that it delivered 254,695 vehicles from April to June as opposed to 310,048 vehicles in the previous quarter 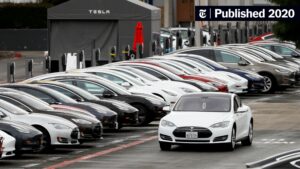 According to reports, Tesla Inc delivered about 17.9% lesser electric vehicles in its second quarter as opposed to the one before that. This is was for the Covid-19 shutdown in China affected the company production and supply chain significantly. For a while now, Tesla’s factory at Shanghai has run into a host issues owing to the lockdowns.

On Saturday, June 2, Elon Musk’s EV company stated that it delivered about 254,695 vehicles in the April to June period, as opposed to the 310,048 vehicles in the previous quarter, putting an end to almost a two-year-long run of record quarterly deliveries. Unfortunately, a sudden rise in Covid-19 cases in China compelled Tesla to halt its Shanghai factory production temporarily. This resurgence even had an impact on facilities of suppliers in China.

As the lockdown slowly eases, the electric car maker boosts up its production at Shanghai factory, which would aid in boosting deliveries in the coming quarters. Last month, CEO Musk informed executives how he had a ‘super bad feeling’ about the economy. Additionally, stating how it was necessary to cut 10% of its workforce at Tesla. He, however, assured that despite the supply-chain challenges continuing, demand for Tesla cars remains strong.

Last month, the EV company increased prices for certain models in China and the US following Musk’s warning about prominent inflationary pressure on logistics and raw materials. Clearly, June was the month where Tesla witnessed highest production of vehicle in its history, according to a news release. According to analysts, Tesla would expectantly report 295,078 vehicle deliveries for April-June quarter as specified by Refinitiv data. However, analysts had lowered their estimates to 250,000 owing to the lockdown.

Since the third quarter in 2020, Tesla has posted record deliveries each quarter, fighting Covid-19 and and other challenges better than others. Moreover, China emerged as instrumental in the fast increase of Tesla’s vehicle production. This was with owing to the low cost Shanghai factory manufacturing about half of total cars at Tesla delivered in 2021.

In April, billionaire CEO stated the electric car maker’s total vehicle production in the second quarter would be aligned with first quarter. However, not long ago he stated Tesla faced a ‘very tough quarter’ owing to similar challenges in China. Additionally, he stated how the company new factories in Berlin and Texas were ‘gigantic money furnaces’ as it lost billions while struggling to ramp up production.