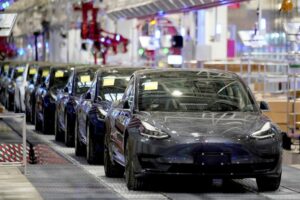 In an interview shown on Tuesday, May 31, Tesla CEO Elon Musk stated how the EV company’s new car factories in Texas and Berlin, Germany are facing losses of ‘billions of dollars.’ Reportedly, this is owing to the struggles to increase production due to the shortage of batteries, along with China port problems.

Musk spoke of this in an interview released on May 31, with Tesla Owner of Silicon Valley, an official Tesl-recognised club situated in Austin, Texas. He pointed out how these factories at Austin and Berlin are currently significant ‘money furnaces, and how it is much like a ‘giant roaring sound.’ Reportedly, the interview with the billionaire was divided into three parts, with the club releasing the last part on June 22.

The Tesla chief executive stated how the company’s factory a producing a small number of cars due to the challenges in increasing production of its new ‘4680’ batteries. Along with it, issues with its tools being stuck in ‘port in China,’ which are used to its regular 2170 batteries. Significantly, he stated how though these issues would get solved rather fast, it needs ‘a lot of attention.’ He added that the factory in Berlin is ‘slightly’ better off as it started with the use of the 2170 batteries for the cars manufactured there.

Tesla focusing on not to go bankrupt:

Additionally, Musk specified how the lockdowns in Shanghai owing to the pandemic were indeed ‘very difficult.’ The shutdown not only impacted the production in the Shanghai factory, but also at Tesla’s California plant which utilised certain vehicle parts produced in China.

The EV maker plans to stop most of its production at the plant in Shanghai in the first couple of weeks in July. Mainly, this is to work on a site upgrade in order to boost production output. Further, Musk added how the last two years turned out to be ‘an absolute nightmare of supply chain interruption’ with one following another, which Tesla has not escaped yet.

Earlier this month, the billionaire stated how he had a ‘super bad feeling’ regarding the economy, and that Tesla required to cut about 10% of its staff and suspend ‘all hiring worldwide.’ Later, he added that 10% cut in its salaried employees would come about every 3 months.

Earlier in 2022, Tesla Inc initiated production at the Berlin and Texas factories, where both were important to the company’s growth ambitions. Musk later stated how he expects the EV maker to start production of the delayed Cyberstruck electric pickup in mid-2023.