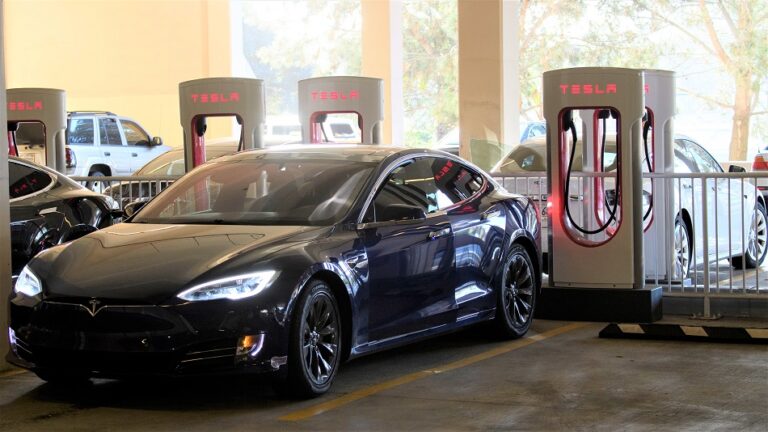 Tesla Inc. electric vehicles charge at a supercharger station on January 4, 2021 in Redondo Beach, California. - After shares rocketed higher in 2020 on surging auto deliveries, Tesla enters 2021 with plenty of momentum even as its vision of taking electric cars mainstream remains a way off. (Photo by Patrick T. Fallon / AFP) (Photo by PATRICK T. FALLON/AFP via Getty Images)
Home
Cars

Tesla Giga Shanghai manufactured vehicles will not come to India!

Indian Road Transport Minister Nitin Gadkari slammed his statement to Tesla. It said that the company isn’t allowed to sell the vehicles in India which are imported from other countries. If Tesla wants to enter into the Indian Market, the vehicles should manufacture in Indian alone, the minister Said.

For now, Tesla’s China-based Giga Shanghai factory has been producing a record number of vehicles per year. Even Elon Musk prioritized the Chinese market and the recent electric vehicles are being done in Shanghai and exporting to other nations. Since there is a tuff competition globally in the EV field, Telsa started their factories one by one along with many major countries and places. Telsa faced the challenges to enter the Chinese market and competing with the already existing EV producers there. It took it as their own challenge, that the Chinese were already preferring EVs, thus made the country the best place to manufacture their new Vehicles.

But when we look into both political and economic points of view of the individual countries. China and India are both acting as rivals in electronic goods and manufacturing, to compete with China India has already initiated their plan of not importing Chinese products which have high business in India. Nitin Gadkari said that Tesla can establish their factories in India to manufacture the vehicles and sell them in the country. He also said that the Indian Government will lend their complete support economically too if they enter into the country to establish their factories. Gadkari opinioned that if the vehicles are made and sold in India, it will be favorable for the both manufacturing company and the country.

But the recent plans of Tesla are entirely different. Tesla made Shanghai Giga factory the export hub of 2021 where they exported 7,000 Model 3 units were exported to the other countries within the first two weeks of this early year. And recently the factory started exporting Model Y to Europe just last month. Though every country has the same demands just as Gadkari said, The demand for Model Y in Europe and Tesla’s European Gigafactory, which is called Giga Berlin has not yet been completed, Europe agreed to import the EVs from China putting their non-export stance aside. If Gigaberlin is completed, then Europe will stop importing vehicles too.

Since India is always supportive of initiating new companies in the country, Gadkari in his view said that the country is all open for Tesla if it wants to start their market in India.

But Musk isn’t favorable in establishing the factory in India that without knowledge of the EV market in the country and growth opportunities for the country. It is only a safe business idea for Tesla doubting their billion dollars on a project that may not be successful. But the country has already offered even financial help if the company wants to spread its market in the country. So it must not be a Vehicle manufacturing company but it could be anything as a trial and see the business and demand whether they can start a factory in India or not.