Tesla Giga factory Nevada officially produced 100,000 battery packs. This incredible milestone was shared and celebrated as it was an uphill battle for the factory and Tesla battery partner Panasonic. After ramping the battery production, they continue to keep up the speed despite the supply chain pressure. 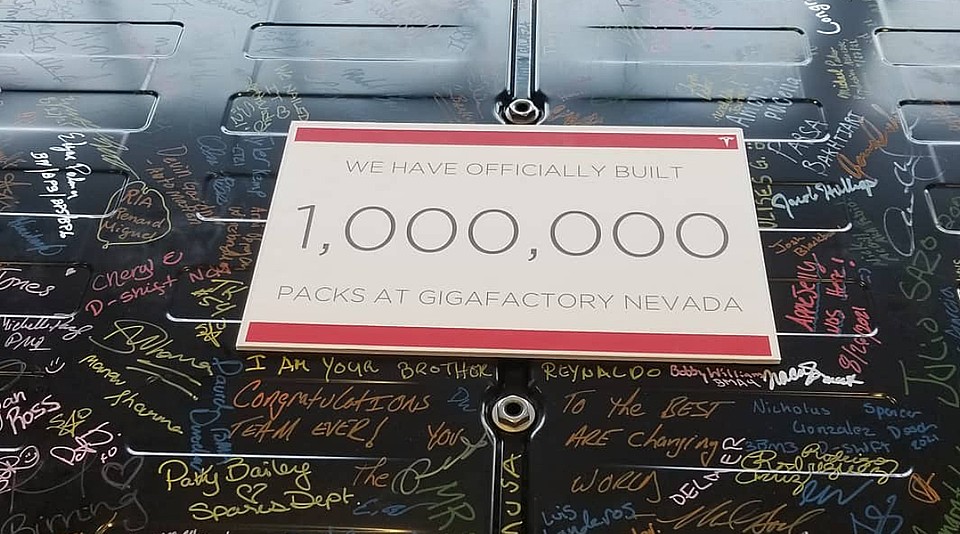 It was officially posted by Tesla Motors on Reddit. Giga Nevada team commemorated the celebrations. The image shows, “We have officially built 1,000,000 packs at Gigafactory Nevada.” The manufacturing activities started in 2017, which continued to play a key role in the Tesla car manufacturing process. In addition to cars and batteries, the factory makes powertrains for Model Y and Model 3. The batteries manufactured here are 2170 battery packs.

Having started before the shift to EVs started in the automotive industry, Tesla Nevada received a lot of criticism initially. However, it paid off as many automakers are struggling to keep up with supply chain pressure and fulfilling the demand.

In 2017, Tesla was only making Model S, a mid-volume EV. Compared to other Tesla cars, the first model received a lot of regular negative opinions on EVs. Despite being easy to maintain and also had a lesser maintenance fee as fuel is not required Model S did less good than it actually could have in the present scenario.

It was not just from common people, but also experts in the industry. In the 2014 publication of MIT Technology Review, there are details about the possible challenges Elon Musk could face. Stated as a “savvy business move” while seeming like there is certain potential, the publication hinted that it would not be possible for such a small company to dominate the market. Where it said, “gigafactories will need to become a reality.”

Tesla is continuing to prove its point as Model 3 was also listed as the world’s best-selling car, dominating many fuel-powered vehicles. This domination is all before countries started pushing for electric vehicles and the automotive industry finally started working on their EV production line.

There are very few charging stations in the world, where around 25,000 Superchargers are owned and operated by Tesla. Given the range of the cars, luxury feel, and easy maintenance, the charging infrastructure was installed accordingly.

In the past, the critics focused on how electricity is generated from coal or other fuels, thus not environmentally friendly. Toyota’s chief in 2020, and Washington Post in 2019 stated that electric cars are “overhyped”.

However, Tesla made sure their Superchargers are powered with renewable sources like Solar in most locations. In the case of home installations of chargers, the supply of electricity can’t be controlled. Tesla also works on energy storage systems for houses, which is again depends on what the customer prefers for their Tesla Supercharger.