Tesla Model S Plaid Breaks Its Own Record By 0.02 seconds, the Plaid is seen to be faster than stated.

Tesla Model S Plaid breaks its own record by 0.02 seconds when tested under specific conditions. Motor Trend tested the car on a VHT-prepped surface, as Tesla wanted. 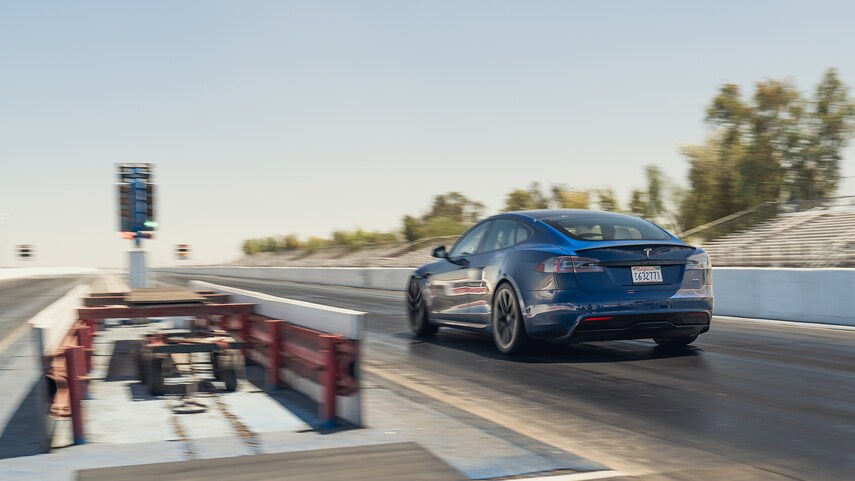 We head to Auto Club Famoso Raceway to test out how long it takes the 2022 @Tesla Model S Plaid to go from 0 to 60 mph. Tesla's new Model S Plaid promises incredible acceleration but does it deliver? Get the full story right here ➡️ https://t.co/VmHanxyPcm pic.twitter.com/3hqleduixY

It was found that the Plaid could accelerate 0-60mph at 1.98 seconds. And achieved the quarter-mile in 9.25 seconds at 152.6 mph. Thus making the Model S Plaid the fastest production car on the Motor Trend track. Prior to this, the Model S P100D Ludicrous+ hit the record with 60 mph in 2.28 seconds.

A record is a record

Though there is only 0.02 seconds difference in the record. Tesla Model S Plaid still broke its own record than stated before.

Furthermore, the test for Model S Plaid was done as asked by Tesla. Despite Motor Trend usually only testing on their Fontana track for the production car. Tesla urged that the tests must be done on the VHT track. Which increases the traction to car tires. Thus giving the car more grip and achieve optimum acceleration.

Additionally, the tests were done on normal tracks too, as suggested by the driver. The huge reason behind testing both is because Tesla insisted that the Plaid be tested on the VHT track. And Motor Trend usually tests on regular Asphalt for production cars.

The experience is stated very beautifully,  “The Plaid covers distance so quickly, it’s difficult to even register what’s happening. The yoke gets light in your hands, your neck muscles strain as your helmeted head digs into the headrest, and your surroundings blur into mere shapes and colors as a quarter-mile of pavement vanishes underneath you.”

As mentioned the race also took place on the regular Fontana race track. They haven’t run the quarter-mile test but calculated it from the achieved 60mph speed. On a regular track, the Model S Plaid accelerates at 0-60 mph in 2.07 seconds.

Despite being tested on a regular track with normal conditions, the Plaid broke the previous production car record by 0.2 seconds. It was calculated that the car could go 9.34 seconds at 152.2 mph under regular conditions.

Being a car less than $130,000 the record is breathtaking. The car cannot technically be used for racing, because NHRA doesn’t allow vehicles quicker than 9.99 seconds. That too without any additional precautions. So far Tesla doesn’t have any such plans for their Plaid version.

But, if at all Mustang March-E and Tesla Model S Plaid go for a drag race, that would be something we can’t miss!