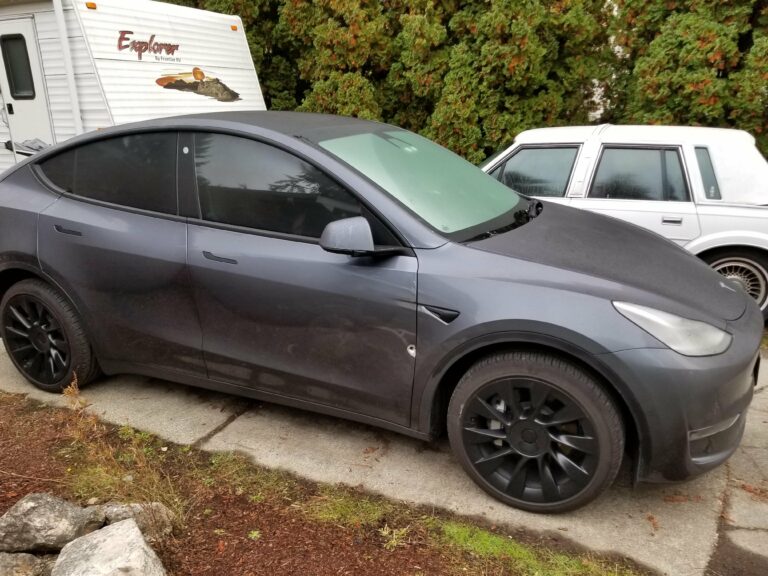 Tesla’s cars strength is already well known especially as the cars survive decently well during crises. While such crises are usually accidents, this time a Tesla Model Y was hit with a stray bullet in a domestic location. Interestingly Tesla’s other car, the Model 3 was also hit in the past by three bullets, and the vehicle holds strong.

A Reddit user recently posted a photo stating that the Tesla Model Y was hit with a bullet. It is unclear how the bullet was there, however it is predicted to be gang-related and not domestic. However, the vehicle stayed strong and that is something that can be left out without knowing further details.

It is known that the user is from Auburn, Washington. Though the place is not really the best place for safety, such shooting is not known to take place in recent times. Regarding what the owner will do about the hole, the owner replied to a question asking whether the hole will be left that way. The owner replied, “That’s why my dad said, ‘people pay for bullet holes you should just use clear epoxy it and leave it as is’ ”

Furthermore, the user updates after checking the vehicle properly. Saying, “Nope, no warning signs or anything. It stopped in the door. Didn’t hit anything electrical which was really nice. Door opens fine as well.”

This is not the first time the Tesla cars were subjected to bullets. In January 2021 and back in 2020, there were similar incidents. However, these incidents were known to be the result of EV discrimination. The older incident in November 2020 was when a Tesla Model 3 owner was threatened with a gun. This bought attention to how electric vehicle owners are treated. Especially when the vehicle is among the first ones to be used in the location.

Later the other incident this year is about Model 3 traveling near Nashville, Tennessee. Initially, the car experienced threatening behavior from another car like lights flashing or honking. Then after the guy shouted at the Tesla vehicle, he took out a gun and shot multiple bullets at the car. The car was evidently damaged enough as many bullets went through. The repair or replacement cost was estimated to amount to at least $8,300. It is interesting how Model 3 and Model Y were damaged only a little. It shows how safe the cars are designed, useful especially during crises.

Pentagon monitoring alleged Chinese spy balloon over the US