Tesla is known to be preparing manufacturing machines for its making of 4680 battery cells. Also, it would start with the establishment of a battery manufacturing plant in the city of Markham, Canada. Gigafactories worldwide will be receiving batteries from this plant.

The news was initially announced by the Mayor of Markham in the Mayor Review publication. Stating, “I’m delighted to share that Tesla Canada is joining our already robust automotive and technology ecosystem by locating a manufacturing facility in the City of Markham,”

Furthermore, the Mayor wrote, “The facility will be the first branded Tesla Canada manufacturing facility in Canada, will produce state-of-the-art manufacturing equipment to be used at the Gigafactories located around the world in the production of batteries.” 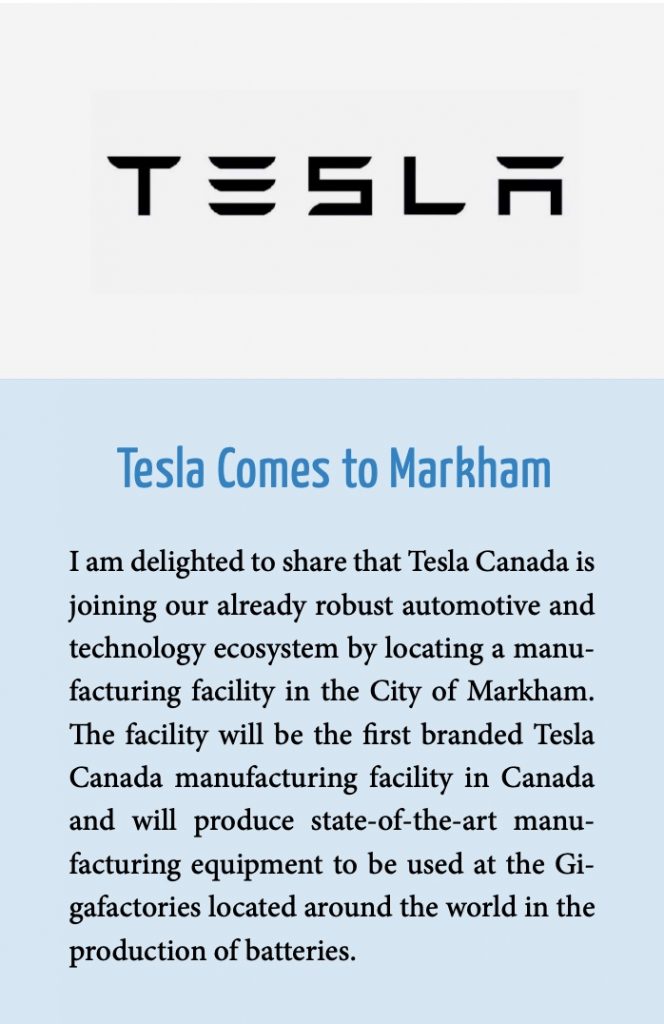 Mayor Scarpitti’s announcement notes that Tesla’s major factories will receive battery production equipment, including, potentially, sites like Giga Shanghai. Tesla Canada’s facility in Markham will most likely produce equipment for the company’s long-awaited 4680 battery cells. So far, Tesla has a 4680 production pilot line on Kato Road near Fremont that seems to be making significant progress. Tesla also plans to build a 4680 battery production line in Giga Texas and Giga Berlin.

Some battery equipment was recently delivered to Giga Texas, as per recent drone footage of the site. The delivery hinted that Tesla is closer to producing 4680 cells outside its pilot line in California. According to Drew Baglino, Tesla’s Senior VP of Powertrain and Energy Engineering, tests of the 4680 cells have gone well to date. Tesla expects the first vehicles with 4680 cells to be delivered next year.

“Early next year, from a non-cell perspective, structural, battery, crash, range, and reliability testing are on track to be complete this quarter. Testing is — to date has gone well, and the Fremont manufacturing line is on track to support,” Baglino replied to a shareholder who asked about the expected delivery date for vehicles with 4680 cells.

However, he reminded everyone listening in on the Q3 2021 earnings call that Tesla’s timeline may change due to unexpected challenges. For instance, Tesla is still dealing with global supply chain challenges.

“However, this is a new architecture, and unknown unknowns may exist still,” Baglino added. “Our top priority is ensuring quality in what we deliver. And from a cell perspective, we are comfortable with the design maturity and manufacturing readiness, matching the packing timeline I just mentioned.”

The first Tesla car with 4680 battery cells will be the Model Y, followed likely by the Cybertruck or the Semi. Both Giga Texas and Giga Berlin will start operations making Model Y vehicles with Tesla’s structural battery pack and 4680 cells.