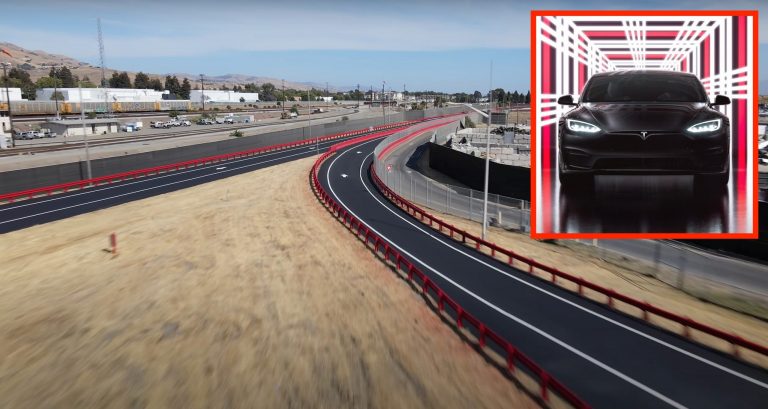 The Tesla Model S Plaid delivery event is going live on June 10th. Tesla Fermont Flyover, who has been following the Fermont factory developments for a while now. And recently shared the redone track. As the event is coming up, it is most likely that the Model S Plaid will be on the tracks on the event day.

As shared in the video, the track looks neat and new. The track had its first Tesla car test in 2018. It wasn’t that fancy back then and wasn’t initially designed as a race track. And the recent development reasons are not stated. However, it is expected to be used in the upcoming event.

Additionally, the test track is located just back of the factory, where it is easy for Tesla cars to test drive. In the video, there are multiple cars seen in the location. And it doesn’t seem like the Model S Plaid will be going at higher speeds.

Basically, it is a 35-acre land, where it is expected that some attendees will get to test drive the Plaid during the event. Later this week, the Model S Plaid first batch is set to be delivered to customers.

Furthermore, the test drive by attendees was speculated as hinted by Martin Viecha, Tesla head of investor relations. Stating, “Have you ever wondered “how would it feel to drive a hydraulic launch roller coaster?” Well, our first customers are about to find out.”

Have you ever wondered "how would it feel to drive a hydraulic launch roller coaster?" Well, our first customers are about to find out. https://t.co/p7e7j3Gxjv

By the looks of the factory, it seems like Tesla is going to have a strong Q2 ending. Model S sedans seem to be ready for their deliveries.

June 10th is a much-awaited event, and even more for the customers who will receive their Plaid deliveries.

The last time Fermont Factory was seen on video, was when a drone was sent to the location. Which spotted Tesla Semi. As there was all-electric class 8 and Model Y were spotted. It is said that the Tesla Semi indeed has Tesla Trademark Speed.

Also, the Tesla Model Y was spotted with a camera rig. Interestingly, only a couple of Semi’s were spotted since 2017. Looks like Tesla is preparing to push its Semi for potential customers.

There are reports that suggest Tesla started looking for release candidates. However, more details are yet to be known. In March, Elon Musk mentions that the demand is not the problem, but the near-term supply is harder.

Demand is no problem, but near-term cell supply makes it hard to scale Semi. This limitation will be less onerous next year.