Not only will the year 2021 be recognized for record cryptocurrency values and sky-high valuations for blockchain companies, but it will also be known for a new inflow of talent into the fast-growing sector.

Surprisingly, the cryptocurrency industry accounted for 70% of Forbes magazine’s 30 Under 30, with 21 blockchain pioneers and innovators on the list, nearly doubling the number from the previous year. 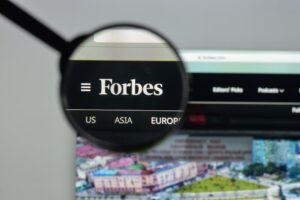 The list includes programmers, artists, media executives, and venture capitalists who are collaborating to construct and invest in the next generation of the internet, develop unique non-fungible tokens (NFTs), pioneer crypto philanthropy, and disrupt global banking using Bitcoin-inspired technologies.

Sam Bankman-Fried, the 29-year-old founder and CEO of cryptocurrency exchange FTX, now has a net worth of $26.5 billion, making him the world’s wealthiest under-30.

His FTX crypto exchange has recently received $40 million for a valuation of $1.2 billion when he was named on Forbes’ Under 30 list in 2021. Bankman-Fried has a net worth of $26.5 billion after two major fundraising rounds, one valued at $18 billion in July and the other at $25 billion in October.

Fried recently stated that the Bitcoin industry would continue to see crashes and bull runs, but that select projects will most likely weather the storm. According to him, the crypto protocols and efforts that can scale to allow for widespread adoption as blockchain technology rises in popularity will survive the longest.

In July 2021, FTX secured $900 million at an $18 billion valuation from investors including Coinbase Ventures and SoftBank, making Bankman-Fried one of the wealthiest persons under 30 in history. The majority of his fortune is connected to his ownership of nearly half of FTX and a share of its FTT tokens, which he says he will eventually contribute to charity based on a concept he calls “earning to give.”

Vitalik Buterin, the 27-year-old co-creator of Ethereum (ETH), has a net worth of $1.4 billion, making him the world’s youngest known crypto billionaire. Buterin was 23 years old when he first appeared on the Forbes 30 under 30 list, and Ethereum’s market value was over $30 billion, with his net worth estimated to be around $400 million at the time. The worth of the Ethereum network has topped $500 billion as of this writing, making him one of the world’s youngest billionaires.

Buterin showed his altruistic side earlier this year by donating $600,000 in ETH and Maker (MKR) to the Covid-19 relief effort in India, as well as sending over 10 trillion Shiba Inu (SHIB) to be converted into $76 million in stablecoins.

Also read: In a $400 million deal, Polygon had purchased Mir