The importance of social engagement in game design 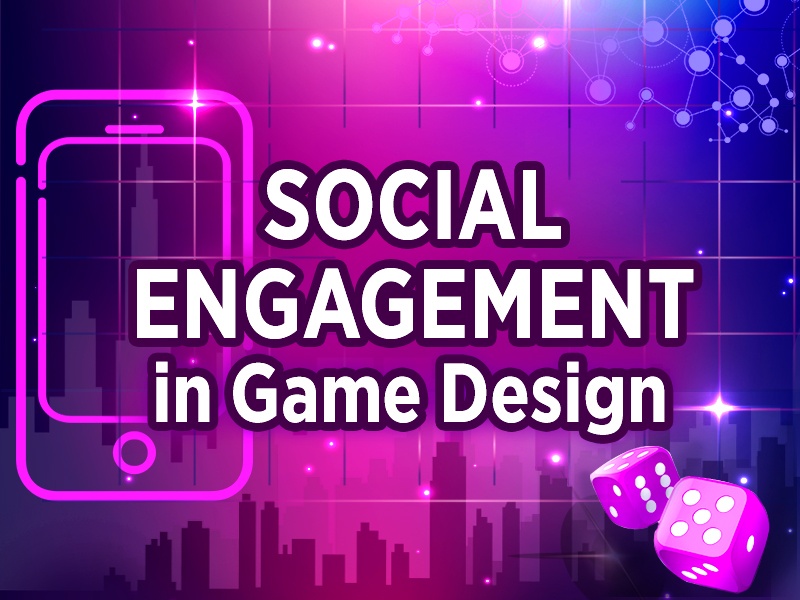 Games as a means of entertainment have been around for hundreds of years. The 17th century saw the emergence of casinos, which acted as spaces for social gaming. By the 1970s, technology made gaming more accessible and convenient by bringing it into our living rooms.

Over the years, the focus has shifted from board games to various battle and strategy games on the mobile screen. But even after perfecting every aspect of a game and marketing it well, it is often seen that users may not take to it.

So what sets successful games apart? For one, the level of social engagement they offer.

Thanks to technology, developers can design games for not just entertainment but also for active social engagement with other players. Introducing this aspect into game design allows fans to connect and play with like-minded people.

Social engagement has proved to be an asset for virtual gaming. A very popular example of this phenomenon is the millennial gamer’s paradise, PlayerUnknown’s BattleGrounds (PUBG). The game pits multiple combatants against each other until the last player/team remains. Each player interacts with up to 100 players in a single match, with the benefit of live chat with their team members and opponents.

However, it’s not necessarily just multiplayer or action-packed games that feature this. A comparatively mellow game like chess has adopted this feature in many of its online platforms too. Players can create ‘chat rooms’, add friends and opponents to discussions, change topics, or view their peers’ games and analyse them through the chat box in real-time.

Social engagement integrates the real-time experience of gaming with virtual ranking systems, like competitive leaderboards that motivate players to compete against friends and other players. Even in online rummy card games, virtual communication offers a social gaming experience that does more than enhancing players’ cognitive skills. With a social angle comes a sense of competitiveness that keeps players hooked each time they press ‘Play’.

Nothing gets a player going better than a sense of competition. When a game allows for social interaction among players, it gives them an opportunity to make new friends. This promotes healthy competition with friends and other players without any negativity. Plus, socialising with one’s ‘game gang’ gives a player all the more reason to catch up and win against them, thus keeping them hooked without undue stress.

For instance, let’s assume a game requires a player to complete different levels across a world map. If a player can see where they are placed and where their friends are located, it could serve as motivation to do better and beat one’s friends!

When players are able to invite friends to a game, it keeps them more interested. Whether it is to get an extra life or win a jackpot, socialising through invites is a great way for a player to stay hooked. This is also a great way to level up as invites offer an opportunity to unlock boosters and powers.

With more players signing up, a player’s opportunity to win extra points or rewards also increases. For instance, in a game of rummy, when more players play a hand, the pool increases and so does a player’s probability of bagging greater rewards.

The shift from wooden scoreboards to virtual leaderboards does not alter the essence of this oldest form of social engagement in gaming. Leaderboards are platforms where players’ abilities and scores are ranked for display.

A virtual scoreboard gauges one’s ability with respect to other players while offering incentives to improve the game. A global leaderboard with millions of positions offers a more socially engaging gaming experience.

Real-time voice chat is a crucial social engagement feature as it integrates cognitive and vocal abilities, both of which are necessarily conversational elements. It won’t interrupt the game as it doesn’t appear on the screen. The virtual identity of players while chatting makes it convenient to remain anonymous in case they’re the shy kind (and gamers often are). It is also a great way to strategise team playing for better gaming.

Apart from engaging gamers socially, online gaming has profound cognitive benefits too. With the advantages of improved coordination, memory, multitasking skills, and concentration, gaming can be a great avenue to heighten your mental prowess. With the added benefits of interactive online games that provide platforms for social engagement, gamers today can even win cash prizes.

Online gaming designs embody social engagement through virtual communication to enhance the gaming experience. Indian rummy have amazing rewards at stake, such as cash prizes and holiday packages. Players can choose the kind of variants they want to play according to their interest.

With this innovative feature of online gaming, players get new avenues to make friends and compete against a host of brilliant players, while boosting their skills on the leaderboards!