The ‘Iron Man’ body armour might soon become a reality 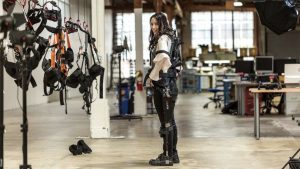 Iron man’s suit had created quite a buzz among Marvel fans and now, it might actually come to a point where wearing high-tech body armor which gives immense strength and energy is quite normal. To be more specific, the technology is known as an exoskeleton and the equipment is being used by a large number of people in real life, globally. SuitX based in California, a manufacturer of the equipment expects that in due course it would soon go mainstream. With the reduction in prices, affordability and accessibility will be accelerated and a good majority will be able to experience and use this technology.

According to Homayoon Kazerooni, the founder of SuitX,

“There is no doubt in my mind that these devices will eventually be sold at hardware stores. As the prices come down you’ll be able to simply buy them at Home Depot.”

In a nutshell, an exoskeleton is an external device that provides support and protection to the user, in addition to equipping them with high levels of strength and endurance, much similar to what the suit in Iron Man did for Tony Stark.

The exoskeletons are at times called by the name “wearable robots.” Their designs can be highly sophisticated or extremely simple depending on the particular use. There are exoskeletons that run on a battery and are computer-operated, which includes motors and hydraulics. While there are also others that display a simple and passive design with springs and dampeners.

Exoskeletons are a stellar example for integrating machines and humans into a single system and it opens up a new door of immense opportunities and scope. Initially, they were used in military and medical applications, however, with further advancements, the number of uses is taking up a whole new domain comprising different fields. Nowadays, manufacturing workers are using exoskeletons to enhance convenience and efficiency. And consumer versions are also being developed to add convenience to day-to-day functions like walking, climbing stairs, or other activities.

The increasing popularity of exoskeletons is evident from the fact that there is to be an expected rise in revenue from $392 million in 2020 to $6.8 billion in 2030.

Car manufacturers, General Motors and Fiat are currently testing the suits. The most significant benefit of the firm’s product, according to Prof. Kazerooni is that it helps in preventing muscle fatigue.

The suit can help in reducing muscle activity by 50%, which implies that there is a lesser chance for muscle injury. This will be of remarkable help in enhancing productivity levels, saving time and costs.

The world has only begun to recognize the immense potential of exoskeletons. If utilized rightly, it will be a literal ‘backbone’ to labor-intensive industries like agriculture and manufacturing, helping them to cut down levels of physical exhaustion and risk.

In short, the exoskeleton will provide anyone irrespective of age and strength with a power boost that would enhance the performance of functions and activities.