For the time being, the National football league (NFL) is said to prohibiting clubs from selling non-fungible tokens (NFTs). This includes negotiating sponsorship deals with cryptocurrency exchanges.

The league is implementing a temporary policy while it develops a strategy to enter the market for sports digital cards and arts, according to The Athletic.
NFL teams will also see severe constraints on selling sponsorship arrangements with crypto exchanges like FTX, according to the league. 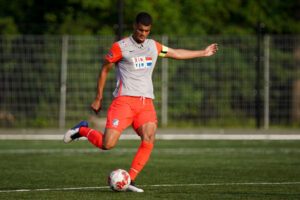 NFL teams can collaborate with asset management businesses that market products that monitor the performance of cryptocurrency assets.

He said, Except as outlined in this policy, clubs will face restrictions on selling or allowing advertisements for specific cryptocurrencies. Also, he included initial coin offerings, other cryptocurrency sales, or any other media category as it relates to blockchain, digital assets, or as a blockchain company within club controlled media.

The National Basketball Association (NBA) is raking in hundreds of millions of dollars through digital collectables sales. Despite the NFL’s delayed entry into the expanding NFT industry. The NBA Top Shot, which offers short snippets of NBA highlights as digital collectables, has generated over $704 million in total sales, according to the NFT portal CryptoSlam.

The NBA’s Miami Heat signed a $135 million deal earlier this year to provide crypto exchange FTX naming rights to their home venue in Florida. In collaboration with the online purchasing platform Shopify, the Chicago Bulls also developed their own NFT collection.

NFTs platforms are gaining a lot of traction and demand in the crypto market right now. And because of athletes and celebrities, this sector is gaining a lot of traction. We can observe how the National Basketball Association (NBA) made a lot of money by selling non-fungible collectable tokens. The NFL is now dealing with a number of issues related to non-football-related activities.

The NFL is obviously facing restrictions from working on selling NFTs-related merchandise or token-like items. Since The Athletic has already stated that this is a temporary policy, there is a chance that they will say more about it in the future to allow for some restriction or plan.

One thing to note is that the NFTs concept paved the way for numerous things to enter the crypto world. No one ever imagined that selling short bits of sports highlights could turn into a large industry.