Five days after Facebook changed its name to Meta, an Australian artist was blocked from an account that documented nearly a decade of her life and work, with no apparent recourse. 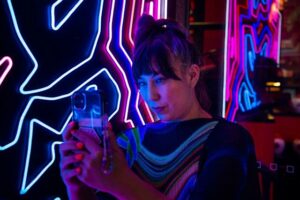 In October, Australian artist and techie Thea-Mai Baumann found herself on prime digital real estate. She launched an Instagram account with the username @metaverse in 2012, which she also used for her creative work. She recounted her life in Brisbane, where she studied fine art, and her trips to Shanghai, where she founded Metaverse Makeovers, an augmented reality company.

When Facebook, the parent company of Instagram, announced its name change on Oct. 28, she had less than 1,000 followers. Facebook would be known as Meta from now on, reflecting its concentration on the metaverse, a virtual world it views as the internet’s future.

Ms. Baumann began receiving messages from strangers seeking to buy her Instagram handle in the days before word got out. On her account, someone remarked, “You are now a billionaire.” “Facebook isn’t going to purchase it; they’re going to seize it,” another threatened.

That’s exactly what happened on November 2nd.  When she tried to log in to Instagram early the next morning, she discovered that her account had been disabled. “Your account has been blocked for pretending to be someone else,” said a notification on the screen.

After nine years, who was she meant to be mimicking now? She attempted to authenticate her identification with Instagram but received no answer after weeks, she added. She spoke with an intellectual property lawyer, but she could only afford a check of Instagram’s terms of service at the time.

“This account is a decade of my life and work. I didn’t want my contribution to the metaverse to be wiped from the internet,” she said. “That happens to women in tech, to women of color in tech, all the time,” Baumann, who is Vietnamese, said.

Metaverse Makeovers was founded by her in 2012. The image on the screen would show holograms “popping” from the nails when a phone running her program was held over one of her team’s elaborate real-world fingernail designs. Before Pokémon Go, before Snapchat and Instagram filters became commonplace, this was the case.

She recognized the potential to scale the technology to apparel, accessories, and beyond, but her investment money ran out in 2017, and she went back to her previous career as an artist.

Meanwhile, Facebook’s CEO, Mark Zuckerberg, was significantly investing in his own futuristic vision of the metaverse, which he described as “an embodied internet where you’re in the experience, not simply looking at it.”

“The metaverse will not be developed by one firm,” Mr. Zuckerberg said in introducing his company’s new moniker. Instead, he said, it will accept a variety of “interoperable” offers from a variety of artists and developers.

This purported openness, according to Cory Doctorow, a tech blogger, and activist, came with a lot of qualifiers.

Mr. Doctorow explained, “He established Facebook by establishing a platform where other businesses can meet their clients, but where Facebook organizes the overall market, reserving the right to destroy those enterprises through negligence, malice, or incompetence.”

If you find this article informative then do not forget to share it with your friends!