Thomas Edison – The Man of Inventions, Science And Business !

Thomas Alva Edison. The world will always remember him for his inventions, which has made life so easy for mankind. He provided us with light bulbs, which is the basic necessity of human beings now. Apart from that, he is the inventor of telegraph, phonograph, alkaline storage batteries and kinetograph (the earliest form of camera).  A lesser known fact about him is that he is also one of the greatest businessman, holding more than a thousand patents for his inventions. 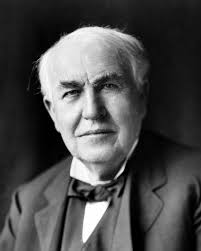 Personal life: He was a small town boy, born in Milan, Ohio. His father was a retired political activist from Canada,  while his mother was a school teacher. He was the 7th and youngest child of Nancy and Samuel. He lost his hearing capability during the early stages of life. He did his schooling for 12 weeks in Michigan. Teachers often complained about him being hyperactive, so his mother started home-schooling him. He was a voracious reader and quite independent learner. He started experimenting with chemicals since the young age of 12. His mother later on suffered from mental illness, which went on to take her life. He got married in 1871 to 16 year old Mary Stilwel. They had three children. Mary died in 1884 due to brain tumor. He married Mina Miller in 1886. Many of his acquaintances labeled him as egoist and he also neglected his family a lot due to work. He died in his 90s on 18th October 1931.

Becoming a Successful Scientist:  When he was 15, he started working with a telegraph, which was gifted to him by a man whose son’s life he saved. He became familiar with electrical science by experimenting with the telegraph. His first invention was the Universal Stock Printer, which synchronized several stock tickers transaction. He set up a small laboratory in 1870, using the money he got from inventing stock ticker. He went on to invent the quadruplex telegraph, which could send signals in opposite directions through the same wire. That was his major invention that made him quite popular. He was asked to develop a communication device to compete with Alexander Graham Bell’s telephone, but instead, he invented a sound recording device called Phonograph. His gift to mankind, the light bulb, was invented by him in January 1880. Nikolas Tesla worked with Edison for a couple of years, before parting ways. This lead to a huge rivalry among these two scientists. Edison worked on developing electric cars, which was a boon to automobile industry. He invented defensive weapons during the first World War.

The Businessman life: His first invention, the Universal Stock Printer’s patent was bought by The Gold and Stock Telegraph Company for $40,000. After that, Edison turned to become a independent entrepreneur and formed many partnerships. He developed his inventions for the highest bidder. His telegraph’s rights were bought by Jay Gould for a hundred thousand dollars. Edison also started his own company- Edison Illuminating Company which was the first inventor owned electric utility, later known as General Electric Corporations. In 1890s, he built magnetic iron-ore processing plant in New Jersey. He developed his process to create a better method for producing cement. On 23rd April 1896, Edison became the first person to project a motion picture. Edison also designed a battery for the self-starter on Model-T for Henry Ford in 1912. His 1093rd and last patent was for an apparatus for holding objects during the process of electroplating. He retired in 1920s.