Cirkul, a company famous for its water bottles fitted with flavoured cartridges, have announced Series-C funding of $70 billion. Fundraise led by SC Holdings, a private equity firm, helped Cirkul get to the milestone of a $1 billion valuation. The raised capital will enable Cirkul to increase its business capabilities across the United States.

Cirkul and its water bottles got famous a year ago when a few people did a TikTok video featuring the product. The video became an instant hit and got viewed by almost 1 billion people.

Everything was unexpected for Garrett Waggonner, CEO, and Founder of Cirkul, as what started as a small business idea became an internet sensation overnight.

According to communication between Walmart and shareholders, almost 1.5 million units of Cirkul bottles have been sold since April 2021, making it a top-performing product in the home appliances section.

Garrot Waggoner, used to play football for Dartmouth College during his college time. After and before matches. He used to try f=drinking water, mixed with flavour powders. He used to end up making it a mess in the locker room. That is when Garret got the idea of developing a water bottle with flavour cartridges, thus avoiding messy situations.

According to Garry Waggonner, the TikTok video was surprising. The company had no plans to do any sort of paid promotion offline or online.

What is exactly Cirkul Water Bottles?

It is plastic water bottles on which cartridges of various flavours can be fixed. When we fix this cartridge and drink water from the bottle, water will become sweet and tasty.

There is a dial-like system to increase or decrease the density of flavour, which can be adjusted accordingly. As of now, the company is offering more than 50 flavours, which are to be expanded to 100 in the coming months. 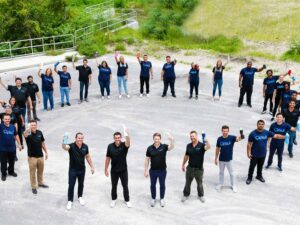 Having sustainable features such as bottles which use less plastic, and 96% fewer carbon emissions from shipping, makes Cirkul Water Bottles an obvious choice for environment-conscious individuals.

During an interview with Bloomberg, Garry Waggonner said that even though they want to grow fast, they would like to grow profitably. As said by the CEO, Cirkul has been profitable in the last two years while being a startup.

About the pandemic and supply chain collapse, Waggoner believes that Cirkul was fortunate enough to have significant control over its supply chain. Being heavily integrated vertically also enabled them to rest and overcome inflationary pressures.