Tesla Gets Mocked In Weibo Despite Receiving Apology The Tesla owners apologize for spreading the Tesla brake failure, though it was just a skit.

Tesla has been receiving multiple apologies in China. And the recent apology from Tesla owners says that they were only staging the brake failure incident. One such stage skit for entertainment slows down the sales for the company. 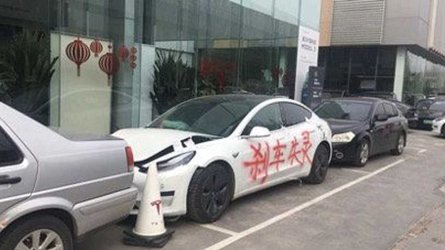 In response to the incident, Elon Musk replied, “Sigh”. Either it was a sigh of, “Oh, good. Nothing is wrong with Tesla cars.” or “Again? why does this keep happening?”. Either way, the truth behind the videos is out.

No issues with Model X

While the video became popular, the brake incident was known as a real problem with the Model X. For months now, Tesla in China had various rumors running around. While most of them were circulated from the media.

This Tesla Model X owner possibly decided to stage the brake rumor and get attention from that. The results for the special team assigned for customer care are being this thorough.

Tesla 🇨🇳 Legal team went after a Tik Tok account, which posted a video showing Model X “brake failure”. Now they apologize for causing the negative effect to Tesla. The guy in the middle has owned his X for 3 yrs & never had any problems, saying the skit was 4 entertainment only. https://t.co/3c8ErewuBx pic.twitter.com/tZ8wi6EmPa

There was no need for a PR team as such in the US. However, the incidents with the media in China and a customer protesting against Tesla turned out this way. Now things seem to be picking up fast, as media outlets apologized for false information. And somehow the Special handling team managed to get an apology from the Tesla Owners performing brake failure skit.

Tesla in China has been gaining more attention worldwide. Knowing that the Model X brake failure is not real information, eases the current owners. Already the Giga Shanghai is experienced lower sales in the month of April for this reason. Being a top-selling EV company, buyers need to have assurance about the safety of their product.

Despite the team working hard to bring facts. Their recent account on Weibo (China’s social media platform) created a little mockery among locals. As stated on Weibo, it says, “Tesla Legal department”. And its bio read, “think independently and tell right from wrong.”

On the other hand, it is true that the company has been trying to keep up its reputation. In an attempt to bring facts, the company is receiving mixed remarks from the public. China works differently, being an outsider Tesla might have to work it out for in the coming months. A simple apology wouldn’t suffice, such a result from the police investigation would have been better.

A netizen named Aixiaojindou, said on Weibo, “Is Tesla trying to educate and popularize basic knowledge of the law to its clients?”

another netizen known as Yannis, stated, “If you keep protesting will we be contacted by their lawyer.”

And the slight mockery goes on. As of now, the account is the following 10 accounts including Elon Musk. Further, it has around 3,500 followers.