TIME, a famous American publication, said this week that it will begin to keep ether (ETH), the Ethereum network’s native coin, on its balance sheets. This is part of his formal journey into the story of metaverses, a virtual place he will access through Galaxy Digital’s hand. 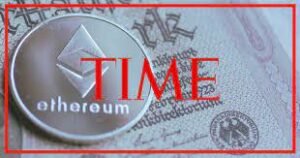 This was revealed in a news release issued on November 18 by the financial services and cryptocurrency investment firm founded and run by billionaire Mike Novogratz.

TIME will also accept ETH as a form of payment, making it one of the most important media firms to collaborate with the ecosystem’s second most valuable crypto asset.

“In keeping with its stance on cryptocurrencies and Web3, Galaxy Digital supported the adoption of Ether (ETH), the Ethereum blockchain’s native coin, marking the first time a major media firm has accepted ETH as payment.” “In addition time magazine plans to hold Ether (ETH) on its balance sheet,” they wrote in the note.

They will pay TIME in ETH as required, taking advantage of the fact that the publication already accepts cryptocurrency payments, which they have done since the beginning of the year.

TIME published an exclusive set of three magazine covers as non-fungible tokens (NFTs) in March, which were sold at auction. Among them, according to CriptoNoticias, the most iconic covers in the 98-year history of the famed magazine, as well as the first designed entirely as an NFT.

As if that wasn’t enough, they also reported something similar to what was reported today: they began receiving their first Bitcoin payments, which are now accounted for on their balance sheet, joining companies like MicroStrategy and Square in pioneering the use of bitcoin as a strategic treasury reserve.

“Galaxy Digital recognizes the metaverse’s and Web3’s enormous development and potential.” “Our team is playing a critical role in educating the traditional world about this transition,” TIME magazine President Keith A. Grossman said.

He remarked, “I am eager to cooperate with these visionaries as we combine the power of the media and the metaverse to educate our readers and work our way toward a more immersive virtual future.” TIME100 Companies Metaverse, a firm that would initially educate people about metaverses, was recognized by Galaxy Digital.

For the time being, they’ll start with a new weekly TIME email called “Into the Metaverse,” written by Andrew Chow. The essay “will explore the ways in which our physical and digital selves become increasingly interwoven,” according to Galaxy Digital.

“Over the next decade, the metaverse will become an increasingly essential aspect of the global economy; the distinction between our physical and digital realities is already blurring,” stated Novogratz. “As we attempt to introduce readers, creators, and bystanders to the metaverse and explain the incredible amount of transformation that is happening there,” he added, “we look forward to partnering with TIME, an iconic brand that promotes innovation.”

TIME will rely on educational resources, as well as those related to metaverses, to achieve the goal, which will be made available through the new TIME for Learning portal, which will be launched in December.

While TIME’s entry into the bitcoin market sets a precedent for prominent publishers, it is not the first to do so. A significant publishing house benefited from NFTs in the same year.

It’s about the magazine Rolling Stone, which has launched collectible covers for sale in both digital and paper formats, as reported by this medium. On the one hand, just two virtual units were sold in an auction held from November 10 to 14 utilizing non-fungible tokens (NFT). The printed versions, on the other hand, were a limited edition of 2,500 copies that had already sold out.

Also read: Adidas enters the metaverse with an NFT you don’t actually own