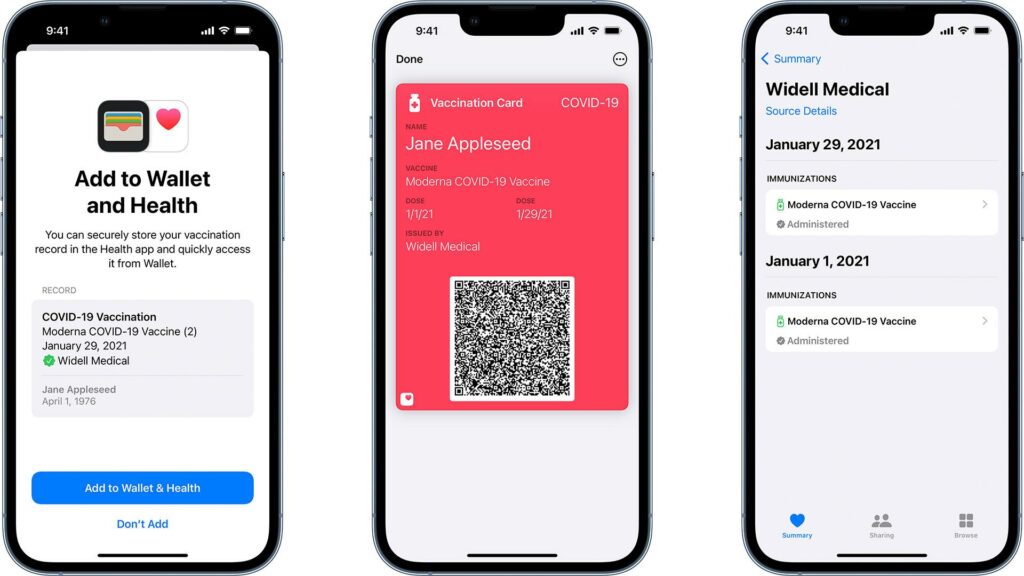 Twitter shines its spotlight on “Apple Wallet” as it gets verifiable COVID-19 vaccination cards. These days, identity proof is something that is necessary for a variety of reasons and actions. But the pandemic has added yet another twist to it just like it has twisted a whole lot of things in its wake. From now on, getting vaccinated won’t be enough. You would need solid proof to attest to your claim. Even for entry into certain places, it will be necessary to have vaccination proof at hand. However, Apple has decided to make it easier for customers and save them the trouble of carrying physical cards, which they might forget or lose by bringing in verifiable vaccination cards to the wallet. This new addition will be a part of the future software update.

The SMART Health Cards standard which is already being used in a number of states will be used by this new feature. With its help, it will be possible to produce proof of the vaccination, following which it can be signed with a private key. This information can then be verified by creating a public key. The same standard is being used by the recently released iOS 15 for storing verifiable vaccination results in the health app. QR codes or downloadable files can then be used to receive your health records.

As convenient and useful as it sounds, this adroit feature is not free of certain concerns particularly related to privacy. Since the information stored is rather sensitive and important, it is important that these concerns are addressed. Perhaps this is the reason why the company has promised the strictest privacy for all the data and information that is stored. Your imported or shared records will not be accessible to the company. Further emphasis is also made to ensure that all the information in the records is encrypted before being transferred anywhere else. It will be possible to share information on a one-time basis to third-party apps provided that they are approved for the same. Apple has not yet given a fixed date for the release of the card although it would be better if it is at the earliest.

The iOS 15.1 beta that was introduced today allows iPhone users to upload their vaccination status to the Health app and then generate a vaccination card in Apple Wallet. pic.twitter.com/4zoHLH8yHm

Vaccine passport added to apple wallet. I wasn’t forced and probably won’t even go to places that required it. Whatever gets us there faster. pic.twitter.com/3M2GYXW1SX

cool thing: apparently soon iphone people are going to get the ability to add their vaccine cards to apple wallet even if their state doesn't have a program for it pic.twitter.com/LOixl9kw8u

For those living in Ontario who haven’t found this yet – a great way to put your proof of vax into Apple wallet. A huge thanks to the independent developers who made this happen. 👊 https://t.co/52LgM88SET

You can add your vaccine passport to your Apple wallet! Check this website to see how to do it https://t.co/xb6tCfnEOI pic.twitter.com/UmbohJhJEy

I suggest taking a picture of the front and back of your ID, putting your debit cards on Apple wallet (if you have iPhone), and make a photo album with all the info you'll need for Lost Lands.

As if the option to download your 💉 status to your Apple wallet doesn’t already scream “💉 passport” pic.twitter.com/M4B8OaQHQ9

Whoever designed the Apple wallet for vaccine receipts, 👍👍 for the orange on the 1st dose. 😆 pic.twitter.com/0U8AmWL0ub

"And in an upcoming software update, they can also choose to add verifiable COVID-19 vaccination records as a vaccination card in Apple Wallet to present to businesses, venues, and more." https://t.co/jP6YhNShjd pic.twitter.com/uHaV7hopon

It seems like the users are really thrilled about this brand-new feature that will add a level of convenience and ease when it comes to producing vaccination certificates. Let us just hope that when the card is finally released, it lives up to the expectation rather than going the opposite way.