Warren Buffett, the well-known philanthropist and the CEO of Berkshire Hathway steps down as the trustee of Bill and Melinda Gates Foundation. The announcement that came on Wednesday managed to turn some heads although the reasons for the resignation aren’t clear. The news comes just weeks after the separation of its namesake founders, Bill and Melinda Gates who are the remaining board members of the foundation which has global acclaim for the charitable work done.

Warren Buffett is well known for his philanthropic actions and over the past 15 years, he has donated over $27 billion of his own money to the foundation. Although the prospects of the foundation look rather shaky with the separation of Bill and Melinda Gates, and the resignation of Buffett, the latter made clear that his “goals are 100% in sync with those of the Foundation.” 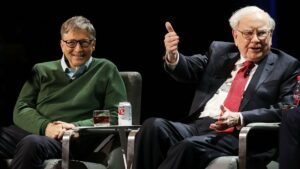 Bill Gates and Warren Buffet have an acquaintance spanning over a number of years, and Gates was also a board member of Berkshire Hathaway before stepping down from the role in 2020. Buffett is someone who prioritizes charity and philanthropy, and this is the primary reason why he decided to donate a monumental amount of his wealth to the foundation with the strong conviction that it will be put to the right use by the couple.

The announcement of the resignation also came with a note of clarification concerning the latest criticisms faced by the billionaire regarding the non-payment of taxes. The news of some of the wealthiest paying little to no taxes had made quite a storm with Buffett facing a rather hard backlash as he had previously urged in an interview that the rich must contribute more towards taxes. The note of irony didn’t miss the attention of the people who were eager to point out the hypocrisy involved. And today with the announcement, Buffett straightened the creases concerning the tax issues saying that he has little income.

With the resignation of one of the three board members and the separation of the Gates couple, the Foundation’s sustainability is in questionable terms. However, it was made clear that both Bill Gates and Melinda are willing to work together for the Foundation thus keeping some of the questions at bay.

Twitter was filled with reactions and responses with occasional memes after the announcement was made. Though a good number of tweets assumed a harmless tone, the majority of them had a bittersweet tone to it since the recent tax-related fiasco is still fresh in the minds of the netizens. Thus, it is only reasonable that many went ahead and took sarcastic jibes. People went on to slam the billionaire for the apparent hypocrisy that has been looming ever since the news came out about tax evasion. While on the other hand, as if to add comic relief to the situation many came forward with requests and pleas for donations from the billionaire. After all, he has money to spare and he is interested in philanthropy. So why not? Here are some reactions and responses from Twitter.

I wish he'd donate $1bn to Scotland so it could build a Net Zero technology manufacturing sector..

Oh, no! What shall we ever do when 159 yr old billionaires aren’t running everything?!?!?

I hope someone has a plan out there! 👀🥸

All the focus on the money he donated. Any reason why he resigned from the foundation board of trustees?

I need at least $200 000 my business is affected(liquidated). Retire in respect and donate to people in serious need

Must be nice to have four billion laying around.
To be clear, this is like someone with $100, donating $4.

hey mister partener of Bill Gates and financier of criminals, it is easy to exploit people eh, as easy as a biological bomb, you know that's costs 0.05 percent of a H bomb, or A bomb. Typically Low Cost, excellent for business, it can be produced in Albania, Romania, or in Niger