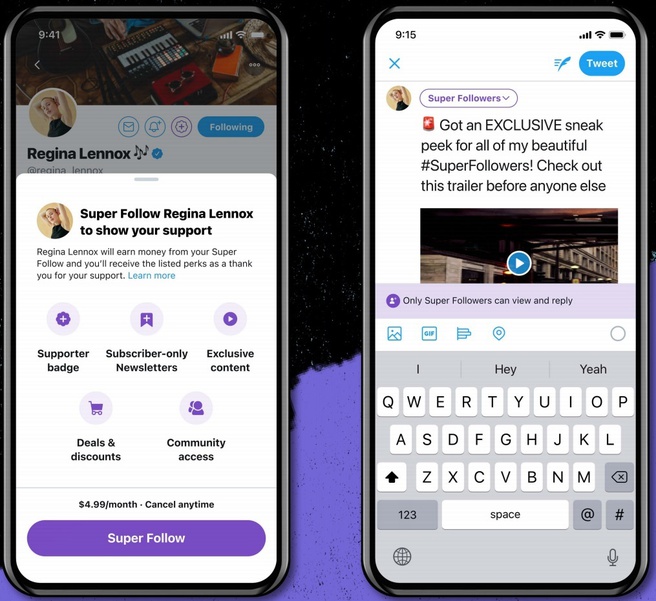 Twitter is one of the most influential social networking platforms out there that people absolutely love to use. The popularity of the application has led to the company being under scrutiny and the spotlight almost round the year. Lately, the micro-blogging platform has been busy with launching new features and according to the recent leaks by popular app researcher Jane Manchun Wong, Twitter might soon launch a new “Super Follows” feature as well.

Yes, “Super Follows” is a new feature that is said to be introduced by the platform very soon, according to Jane Manchun Wong who is cited as one of the most reliable app researchers in the industry. Her report suggests that Twitter is almost ready with its new Patreon-style offering and it should be launching sometime this month.

According to a report by Engadget, creators could apply for and manage their Super Follows on Twitter by selecting categories like “Reality TV” or “Adult-only” and the platforms that they already have been active on for sharing their content. The report further suggests that these platforms could be Twitch or OnlyFans and more.

Apparently, most of Twitter’s new features have already been known to everyone in the industry through leaks and it kind of kills the surprise but this is how the industry works, jobs like app researchers and leakers actually exist where teams are dedicated to finding out about new upcoming features from the biggest technology companies in the world.

Anyhow, Twitter declined to comment on the latest speculations about “Super Follows”. Anyhow, the report by Jane Manchun Wong suggests that there is a minimum criterion for Twitter users to be eligible for “Super Follows”. It includes that the creator should at least be 18 years or older, enjoys over 10,000 or more followers on the platform and one of the most important ones, the creator should post at least 25x over the previous month. All in all, in order to leverage the enjoyment of this upcoming “Super Follows” feature, the creator must be a big shot on the platform with a well-established audience.

Twitter has recently been announcing new features including its Twitter Blue subscription, subscription-based weather service called “Tomorrow”, Tip Jar donations feature and a few more. Twitter is slowly moving towards catering its most active audience with new premium features that they had been demanding for a long time. In conclusion, the social networking platform is making it a little bit easier and engaging for its most active and invested users to use Twitter, competing well with the industry dominants like Facebook.