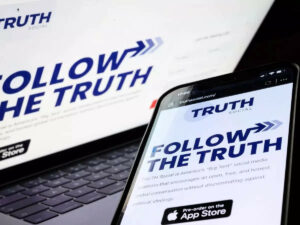 Recently, two key tech executives quit Donald Trump’s Truth Social, according to reports from this week. These Southern tech entrepreneurs possessed two qualities the social media startup required.These are, expertise in the industry of tech, along with a conservative political worldview aligning with the former president. Evidently, a rather rare combination in the industry, which is mostly liberal-leaning and centred in California’ San Francisco.

The tech executives are Josh Adams and Billy Boozer, who were the startup’s chiefs of technology and product development. They had joined he company in 2021, soon becoming key players in its bid to develop a social media empire. An empire backed by the powerful brand of the former president, and built to control what many conservatives ridicule as “cancel culture” censorship from the left.

However, less than even a year later, they decided to leave their senior posts, that too at an important point for the startup’s release plans. This came right after the problematic launch of their iPhone app on Sunday, February 20. Moreover, many users were still on the waiting list without having access to the platform, that too weeks after its launch. Sources specified that the company is working to make the app fully functional within the US by April. Currently, the app is only available on Apple’s app store for iPhones and none for Android users.

“If Josh has left… all bets are off,” one of those sources said of tech chief Adams, calling him the “brains” behind Truth Social’s technology.

The departure of these two executives crucial to efforts of the launch of the app could affect the startup’s progress so far. With its efforts to compete with mainstream social media outlets like Instagram and Twitter, the exit could leave the company high and dry.

Though Boozer did not respond to any requests for comments, a familiar source disclosed further details on the situation. He specified that Boozer had a crucial leadership position as product chief who ran management across crucial departments. However, it is still not clear as to why exactly the two left the organisation. Moreover, it is also unclear whether Boozer and Adams still work on the project on a distinct level after resigning from these posts.

The executives reportedly supported the company’s perspective of its “anti-cancel culture” agenda. In fact, they strongly believed in making a relatively “open platform.” They worked right below the former cast mates of “the Apprentice”, Wes Moss and Andy Litinsky. They have been at the top of the leadership of running the startup since its start in summer 2021. Clearly, the app has already run into a host of controversies since the launch of its app.