Unexpected gap between SpaceX Flacon 9 launches comes to a halt

The last SpaceX launch everyone got to watch was on June 30th. Till then, almost every week Flacon 9 launches were taking place this year. On August 28th, the launch gap will finally come to an end. NASA’s 23rd commercial resupply services mission will be sending payload through Falcon 9. Also, the launch is scheduled at 3:37 a.m EDT from Flordia at NASA’s Kennedy Space Center.

Back in 2019, SpaceX went without any launches for two or three months. After which this year the company had another longest gap between launches. While the reason is unclear, SpaceX is warming for upcoming launches which are expected to take place from this month. Back in 2016, it is known that the company stopped launches for weeks when the rocket caught static fires. The recovery time took them weeks to fix and schedule another launch. However, some SpaceX fans predict that the reason this time is because they don’t have any payload. If not for Starlink satellite launches, not having a payload might be considered as a reason.

Meanwhile, SpaceX is focusing on building and testing Starship. Once Starship launches start, the Flacon 9 launches will be overtaken by Starship. To build the gigantic rocket, Elon Musk ordered mass emigration for hundreds of people for SpaceX other employees to Starbase at Boca Chica.

NASA Resupply mission is about sending payloads to the International Space Station (ISS). Various supplied for keeping the space station running will be sent, including the clothes NASA astronauts wear in space on a daily basis. As Astronauts don’t get to wash their clothes in space, they wear a new set of clothes every day. As per the announcement, the payload includes, “investigation into protecting bone health, testing a way to monitor crew eye health, demonstrating improved dexterity of robots, mitigating stress in plants, and more.

The 23rd @SpaceX cargo resupply mission to the @Space_Station will include an investigation into protecting bone health, testing a way to monitor crew eye health, demonstrating improved dexterity of robots, mitigating stress in plants, and more. https://t.co/bW2cXKqMNQ

The CRS-23 is on track as the launch is scheduled months ago. Interestingly an upgraded Crew Dragon-2 will be used, also known as C208. The Dragon-2 capsule initially debuted last year in December and returned to earth in January 2021. This capsule is known to be two times faster than the earlier crew dragon. 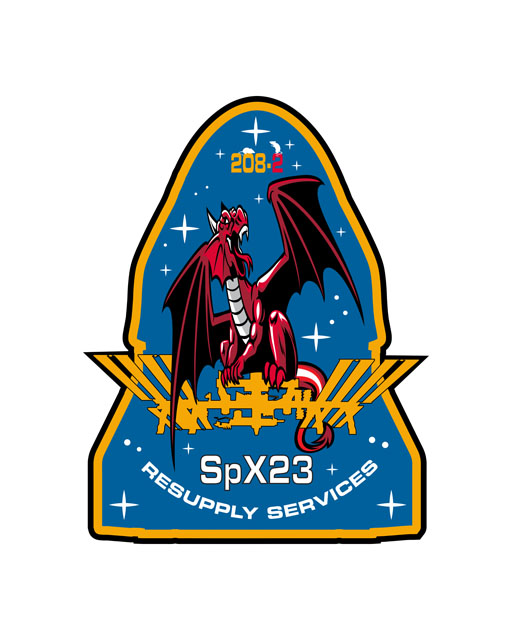 The logo to the left is the one designed for this launch. TinyTol telescope to search for exoplanets and GPS instruments to explore radio occultation are other known payload components in this launch. This payload weighs tons and multiple experimentations are conducted with them. Additionally, protecting the astronauts from harmful rays is also provided. These payload launches have been going on for decades and the ISS has been running on them. As SpaceX has not made reusable rockets possible, sending such payloads doesn’t cost a rocket.