The US Federal Reserve on Wednesday increased the interest rate by 0.75% which is the largest increase since 1994. The interest rate after the jump stays at 1.5 % to 1.75 %.

According to officials in Federal Reserve, unemployment in the country will also go up to 4.1% by 2024. Economists believe that such a situation will lead to a recession.

The Federal Reserve believes that with increasing wages and a financially sound consumer base, the economy can withstand higher interest rates without moving into a recession. 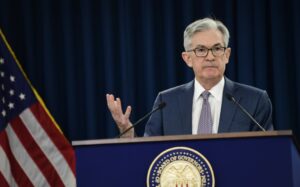 Chief of Federal Reserve Jerome Powell said that they will do whatever is it in their capacity to ensure that inflation levels are brought down to 2%.

During the process of reaching the target of inflation below 2%, unemployment might increase by a small margin as growth reduces, Powell said.

How will increase in rates affect American households?

Every time US federal reserves increase the interest rate, the borrowing cost will increase for individuals and businesses. An increase in borrowing costs will result in decreased spending. It will have a domino effect on Jobs, Employment, GDP and the national economy.

According to Kathy Bostjancic, an economist at Oxford, the next few, months will be difficult to manage as both inflation and borrowing costs will increase exponentially.

Due to inflation and pandemic, the housing market is seeing an increase in prices by almost 35%. Now with the increase in interest rate, mortgage costs will also increase which will add to the mounting pressure on the housing sector.

Data is suggesting that the 30-year fixed rate for mortgages will now go around 6.28% and possibly go above 6.5% over the next few weeks. Mortgage rates are expected to peak by next year mid.

Individuals and businesses having outstanding loans without a fixed rate will also find it difficult to manage the rate hike. As there’ll be an increase in the credit card rates and other loan rates.

Since the announcement of the rate hike on Wednesday, the stock market has been showing positive signs. S&P 500 was up by 1.46% to end up at 3789.99. Dow Jones and Nasdaq composite also performed well, registering a growth of 1% and 2.5% respectively.

According to the Federal Reserve, there can be another increase in interest rate in the coming few months if inflation shows no sign of slowing down.

The United States of America and the Biden administration could be moving into a serious juncture in its economic history.