Home Depot and Best Buy stopped selling the products of Chinese tech surveillance. The outlet reported that the brand’s parent companies were involved in supplying the Chinese government with their surveillance tech. Both US retailers stopped selling products from Lorex and Ezviz.

Lorex is the subsidiary of Dahua Technology and Ezviz is a surveillance tech brand owned by Hikvision. According to the US government, Dahua and Hikvision to its economic blacklist in 2019 due to their mass surveillance of Uighur Muslims. Therefore, Both of these tech companies stands for human right violations and abuses in the Xinjiang Uyghur Autonomous Region. According to reports, They helped in supply of surveillance equipment for monitoring ethinic minorities.

Earlier this year, The Los Angeles Times published a article which report how the facial recognition software developed by Lorex own by Dahua. A user guide for service shows that it’s capability to identify people passing in front of it’s camera.

Maya Wang, a China researcher told to the publication back then,”These systems are developed or designed for specific purpose mainly to target Muslims.”

These home security cameras and system from Lorex and Ezviz aren’t banned from sale yet in the US. But they restricted from Department of Commerce on their parent companies. However, Home Depot and Best Buy promised to stop working these companies. Home Depot stated ” standards of ethics” for it’s reason of stopping work and pulling the product from it’s online store. While Lowes didn’t say anything about the matter. Lorex’s products are pulled out from its site.

As Best Buy told that it would be discontinue their business with these companies but some products (security cameras) are still available for purchase on it’s online store. 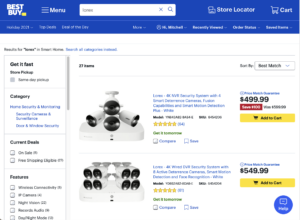 These surveillance issue are not only limited to security camera. The US government also limit their relationship with these companies in work odrone making after knowing that these dones are also providing to the police of Xinjiang.

Due to this video surveillance camera issueand checkpoints somewhere these minority groups are faces difficulties.