Senator Pat Toomey of Pennsylvania said that the United States should gain from China’s totalitarian crackdown on cryptocurrency. 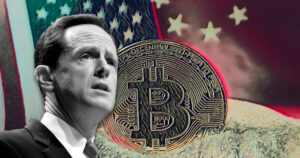 Huge opportunity for the United States

“China’s totalitarian attack on cryptocurrency, including Bitcoin, presents a significant opportunity for the United States. On Twitter, Toomey added, “It’s also a reminder of our great structural advantage over China.”

China’s authoritarian crackdown on crypto, including #Bitcoin, is a big opportunity for the U.S. It’s also a reminder of our huge structural advantage over China.

He stated that “economic liberty leads to faster growth and, eventually, a greater quality of life for all,” and that China’s opposition to financial liberty closes the door to “arguably the most exciting innovation in finance in decades.”

Toomey has only lately sounded the alarm about the lack of transparency and neutrality around the current state of crypto regulation in the United States, adamantly demanding that the SEC establish clear rules for what cryptocurrencies they consider securities.

As the latest chapter in Beijing’s crypto war develops, Toomey, who believes the US should capitalize on the momentum, continues to emphasize that “regulation by enforcement is extremely unpleasant and would kill domestic innovation.”

Senators called for “specific answers” to a list of concerns in a recent letter to SEC Chairman Gensler, which was issued to provide both Congress and market professionals with clarity on the existing policy of cryptocurrencies.“For investors to benefit from a fair and competitive marketplace, regulators must provide the industry with road rules ahead of time. Unfortunately, the SEC has instead chosen a regulation-by-enforcement policy in this area,” according to the letter, which was written in response to Gensler’s testimony before the Senate Banking Committee on September 14.

Others, including SEC Commissioners Hester Peirce and Elad Roisman, share Toomey’s concerns about the SEC’s lack of regulatory clarity.
Toomey asked Gensler to “identify the specific characteristics that distinguish a cryptocurrency that is a security from one that has been deemed a commodity,” and to “provide detailed answers so that innovators have the guidance they need to ensure domestic investment and innovation in these technologies.”

Toomey also urged Gensler to elaborate on “the threshold for a token to be deemed decentralized” and for a more detailed description of the study used for the stablecoin category, among other things.