Stablecoin transactions will be completely untraceable and fixed to the US dollar. Utopia is a decentralized, peer-to-peer ecosystem that has been in development since 2013 and was officially published in November of 2019. Utopia allows users to communicate and conduct business in a secure and non-surveillance environment. The Utopia USD stablecoin, UUSD, will be launched this month by Utopia. 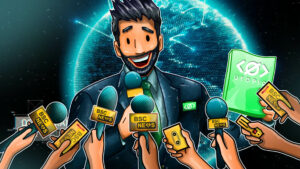 Utopia’s serverless, peer-to-peer blockchain is the foundation for the UUSD stablecoin. An all-in-one kit for secure instant messaging, encrypted email, voice communication, and private web surfing is now powered by the blockchain. Utopia USD, like Crypton, the native currency of Utopia, has anonymous transactions by default and does not divulge any identifying information to its blockchain, making its history fully untraceable.

Every transaction is fully anonymous and leaves no trace of its existence. At the moment, no other cryptocurrency offers this level of future-proof, untraceable transactions. Competing private coins use obfuscation techniques rather than true anonymity, making them vulnerable to tracking tools like CipherTrace.

The Utopia UUSD was created with the goal of maintaining 1:1 parity with the US Dollar. UUSD is a payment method that is anonymous, safe, quick, and liquid. Its value is backed by DAI cryptocurrency collateral, which is publicly verifiable through the cold wallet address and is equivalent to the whole supply of USD.

DAI is soft-pegged to the US dollar and is backed by a mix of other cryptocurrencies that are placed into smart-contract vaults whenever a new DAI is issued. Utopia USD liquidity is supported by market-making algorithms on several exchanges, including Crypton Exchange. Near-zero exchange rates are available for conversions.

Crypton Exchange is a crypto exchange with quick deposits and automated withdrawals that is natively integrated. Domain CRP provides a censorship-resistant version of the exchange within the Utopia ecosystem.

Utopia aims to provide the most advanced blockchain in the industry, as well as a unique set of features for the cryptocurrency market:

By default, transactions are anonymous.
Transactions that happen instantly (less than 3 seconds to confirm)
Transactions are roughly 30 times less expensive than Ethereum.
By design, P2P architecture eliminates network congestion.
Within the ecosystem, there are no KYC or transaction constraints.
Payments and invoicing can be done without using public keys with crypto cards.
Offline and paper money transfers are made possible through the creation and redemption of voucher codes.
Merchants can use the desktop GUI and console applications, as well as the built-in API and utilities.

Other Utopia ecosystem components include a decentralized DNS (domain registry), multiplayer games, the Tor alternative secure network, and the Idyll browser designed to surf deep sites hosted within the Utopia ecosystem, in addition to crypto payments.

The Proof-of-Stake and Proof-of-Resources algorithms are used in Utopia’s blockchain. Full nodes are distributed around the world and help with packet routing and validation in exchange for a payment every 15 minutes (block generation time) for supplying internet access, RAM, and CPU resources.

Utopia’s desktop version is available in 29 languages for Windows, macOS, and Linux. Since its introduction in 2019, Utopia has given a bug bounty program to ensure the security of its ecosystem. Over the last eight years, a group of networking technology aficionados has built the ecosystem. Utopia’s developers will remain anonymous indefinitely to avoid any negative impact on the project.

Also read: Senator Cynthia thinks that the rest of the US should embrace crypto-like Wyoming