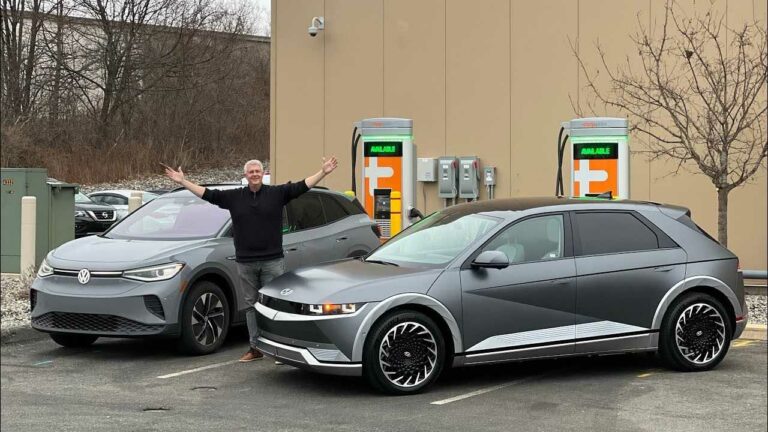 Volkswagen ID.4 takes double the time that Hyundai Ioniq 5 to recharge. Recently Volkswagen’s buggy software received more attention as there are product delays. The company is said to be lacking behind its competitors, especially with charging times.

The VW ID.4 and Hyundai Ioniq 5 are similarly priced vehicles, starting around $50,000 for their 77 kilowatt-hour (kWh) battery versions. But the ID.4 takes more than double the time to charge to 200 kilometers (124 miles) of range, with the two clocking in at 20 minutes and 10 minutes, respectively. One of the engineering decisions that’s put Hyundai toward the head of the pack in this regard was its adoption of an 800-volt architecture. This enables its car batteries to quickly take in electricity at higher power by lowering the current, which can be a limiting factor for other vehicles. The Volkswagen Group brought an 800-volt system to market ahead of others with the Porsche Taycan that debuted in 2019 but decided against offering it across more models, at least for a few years.

. That decision, presumably having to do with expense, may have lacked vision. BloombergNEF’s latest research into ultra-fast charging finds that 24 automakers are adopting 800-volt technology, including established players Stellantis, Toyota Motor, and General Motors, and China’s Nio, Xpeng, and BYD. During VW’s Power Day presentation last year, executives described plans to adopt solid-state batteries in certain vehicles after 2025 and said their target was to offer vehicles that charge to 80% from 10% in 12 minutes.

VW’s EVs would need to charge at significantly higher powers than the current lineup, likely leading to the adoption of 800-volt technology. In fairness to VW, there’s some debate about whether putting this technology into smaller, less-luxurious vehicles makes strategic sense. Tesla CEO Elon Musk and CTO Drew Baglino questioned this during an earnings call in April, saying the advantages of moving the Model 3 and Model Y over to 800 volts would be limited and the cost would be high. Tesla is managing to reach similar charging powers with 400-volt systems that other vehicles achieve with 800-volt alternatives.

It’s unclear if the company can squeeze more out of its 400-volt systems, though, and Musk and Baglino did say an 800-volt system was under consideration for Tesla’s larger Semi and Cybertruck models. As the market for 800-volt components grows and automakers and their suppliers innovate, the cost gap will narrow, and 800-volt technology could take more of the market. Companies including ZF Friedrichshafen, Schaeffler, and Marelli have recently presented 800-volt components. Hyundai’s willingness to adopt 800-volt technology hasn’t translated to the domination of the EV market, as the manufacturer hasn’t been able to satisfy demand. In the current supply chain climate, quickly taking delivery of most EV models is challenging, with buyers waiting more than a year in some cases.