Wall Street major indexes fell in choppy trading on Friday, with the Nasdaq tumbling more than 2%, as mixed jobs data, uncertainty around the Omicron coronavirus variant, and the path of the Federal Reserve’s policy tightening weighed.

Friday kicked off with disappointing news as just 210,000 jobs were added last month, much lower than expected. Stocks initially opened higher before dipping into the red.

Investors were hoping for better jobs numbers. After all, the Dow enjoyed its biggest point jump of the year on Thursday.

The S&P 500 technology index slide 1.9%, leading to losses among the 11 major sectors. Please use the sharing tools found via the share button at the top or side of articles.

Etsy, Adobe, and Tesla were all among the biggest losers on the day, falling more than 5 percent. Facebook fell 1.1 percent on the day and is now down more than 20 percent from its intraday peak in September.

Volatility has gripped financial markets this week. Federal Reserve Chair Jerome Powell’s mixed hawkish tone and the spread of the omicron coronavirus strain. The turmoil may offer investors a chance to position for a trend reversal in reopening and commodity trades, according to JPMorgan Chase & Co. strategists. While it’s likely that the variant is more transmissible, early reports suggest it may also be less deadly, they added.

“What we’re seeing is the propensity to buy the dip,” said Aoifinn Devitt, chief investment officer at Moneta Group. “And why are we buying the dip? Because there’s just so much money sitting on the sidelines. Even though these short bouts of volatility are surprising and certainly have sent a chill through markets, we still have a significant bank of equity returns to enjoy year to date.”

Many investors expect the Federal Reserve to raise interest rates next year after a prolonged period of keeping them near zero. A policy that has propelled the market to record after record over the past year. Federal Reserve Chairman Jerome Powell said this week that the central bank was prepared to pare its easy-money policies at a quicker pace. They opening the door to raising interest rates in the first half of 2022. 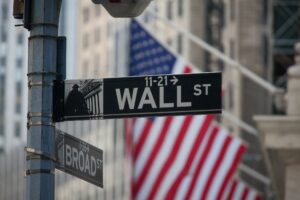 Equity markets have swung wildly this week as investors digested updates on the newly detected Omicron variant. It is spreading globally and prompting countries to reimpose travel restrictions.

“Even if Omicron is not too virulent, all of this, coupled with a hawkish Fed, speaks to increased caution for risk assets. Although if corporate profits continue upward, overall equities should still rise except perhaps many of the most expensive ones,” said John Vail, chief global strategist at Nikko Asset Management.

And the new Omicron variant of Covid-19 has emerged, injecting further volatility into the stock market as investors were already weighing rising inflation and the path of the economic recovery. The variant has triggered fresh restrictions around the world. With throwing up new obstacles to the economy just as travel was starting to bounce back after last year’s Covid-19 measures. Scientists are trying to gauge how effective current vaccines will be against the variant.

Traders and analysts said they expected continued volatility as people around the world learned more about the variant.

While the World Health Organization has already declared Omicron to be “a variant of concern,” it will take time before a scientific consensus emerges on exactly how transmissible Omicron is and whether it is more able to evade the protections of current vaccines or more likely to cause severe illness than other forms of the coronavirus.

Apple Inc. told its component suppliers that demand for the iPhone 13 lineup has weakened, people familiar with the matter said.

Oil prices are primed for gains as Thursday’s decision by OPEC+ to proceed with planned production increases won’t derail an ongoing structural bull market, according to analysts at Goldman Sachs Group Inc. The investment bank sees “very clear upside risks” to its forecast for Brent to average $85 a barrel in 2023.

Stocks are expected to remain volatile in the coming week, as investors focus on developments related to the Covid omicron variant. With the effect of the Federal Reserve’s next steps for dialing back its bond-buying program.

In the past week, stocks sold off on worries about the omicron variant. It is also of concern the Federal Reserve will move away from its easy policies and raise interest rates sooner than anticipated. Fed Chairman Jerome Powell told a congressional panel Tuesday that the central bank will consider speeding up the taper of its $120 billion monthly bond-buying programs when it meets Dec. 14 and 15. The Federal Reserve put its bond-purchasing program in place in early 2020 to prop up the economy during the pandemic.

“It’s going to be a somewhat turbulent December because we probably need to wait for earnings season to get regrounded, back to fundamentals,” said Jack Ablin, chief investment officer at Cresset. “For as high as a lot of the ratios would suggest, price-to-sales, price-to-earnings, when you throw it into the hopper with interest rates and everything else, things aren’t that bad. I don’t think we’re teetering on the edge of a cliff.”

The consumer price index or CPI for November is expected Friday morning. Economists polled by Dow Jones predict it rose 0.6% every month or 6.7% year over year. That compares to a 0.9% gain in October. A 6.2% jump year over year, the biggest move in three decades.

The market may well drop enough by the end of December to make last year’s annual prediction look better than it does now. But if that happens, it will be because of random chance, not because of Wall Street medium.

They may still be if Omicron turns out to be relatively benign. Or the various issues may intertwine: A virulent Covid-19 surge could shock the economy sufficiently to reduce inflation, slow overall growth. And delay the monetary tightening that is increasingly being signaled by the Federal Reserve and other central banks. But this is merely speculation.

The S&P 500 has been oscillating with heightened volatility ever since it declined 2.3 percent in light trading on Nov. 26, which was Black Friday in the United States and the first trading day after an Omicron case was reported in South Africa. Until then, the prevailing narrative in the markets appeared to be that the global economy was recovering smartly from nearly two years of pandemic shocks. Rising inflation, labor shortages, supply chain bottlenecks, and the Federal Reserve’s likely response to these issues were the biggest problems on the horizon for the markets in the United States.

These unanswered questions are affecting the plans of millions of people and the movements of the markets, moment by moment.

Traders are, understandably, confused. And despite the air of omniscience pervading many of the longer-term forecasts being issued these days. There is reason to believe that just about everyone churning them out knows that their ability to see into the future is quite limited, to put it politely.

Among the data points, the Fed will be watching in the week ahead will be the release of the consumer price index and core inflation readings next Friday.

Not everyone believes the Fed is getting set for rate increases in 2022. Burns McKinney, a senior portfolio manager at NFJ Investment Group, is betting the Fed will not rush to hike rates after unwinding its bond-buying. But instead gauge the strength of the economy without any monetary support before tightening policy in 2023.