The past year and a half have been a golden time for start-ups based in India as many of them have been bagging crucial investments for their growth, while others have been growing and staying profitable so efficiently that they have revolutionized their industry while at the same time, taking advantage of the massive pool of talent that India has to offer and employing them in important positions. This has even trickled down as many start-ups based in India have gone on to acquire other start-ups in the country as they synergize together and grow simultaneously.

Over the past week, 39 Indian start-ups successfully received fundings from fund management companies, angel investors and venture capitalists. The total weekly investments amount to $ 395.7 million USD. Out of this staggering amount, Ather Energy (e-scooter producers and retailers) received the biggest chunk of funding which came up to $ 128 million USD. SirionLabs, a software company raised $ 85 million USD, while B2B e-commerce firm, GoKwik was able to raise $ 35 million USD. Chennai based Vivirti Capital that is in the financial tech industry was able to raise $ 30 million USD. 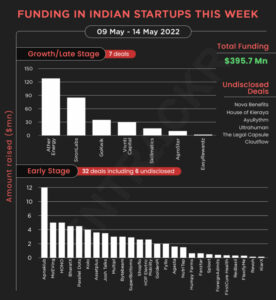 This week has seen 10 more start-ups receive and injection of funds in their company compared to the previous week as they saw 29 Indian based start-ups bag crucial investments.

Out of the 39 this week, 6 companies chose not to reveal the details of their investment for confidentiality reasons.

6 companies that are already established, such as Ather Energy which is in the final stages of its expansion phase were able to bag their investments.

32 companies which are very new and now only embarking on their journey of expansion and growth were also able to receive much needed investments such as ApnaKlub which bagged an investment worth $ 10 million USD, a B2B company another player in the electric vehicle industry received their funding, namely MoEVing which gained $ 5 million USD

As predicted and continuing the trend, Bangalore hosts the greatest number of start-ups that got funded this week at 17, while Delhi took the silver medal with a respectable 10. Chennai and Pune both took the bronze medal with 3 companies each and Mumbai just lost out with 2 companies. Ahmedabad and Haryana rounded off the list as they hosted one start-up each.

This has been another great week for start-ups in the country as people and companies around the world look at India for the next big company.