WhatsApp is a messaging service owned by Facebook, Inc. In a recent statement from its website, the company said that active users will not lose any functionality if they fail to accept its new privacy policy by the initial deadline of 15 May. Their accounts will also not be deleted.

This new development is a far cry from what the company originally said in February, warning that failure to accept the new terms by the May deadline would mean users would lose functionality and they would no longer be able to access the app on any device. The effective date has been extended to 15 May. If users have not accepted the policy updates by then, WhatsApp will not delete their account. However, they will still not have complete functionality of the app until they accept. For a short period of time, they can receive notifications and calls, but will not be able to read or send messages from the app. 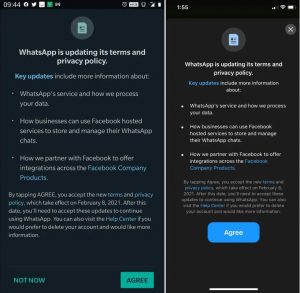 WhatsApp may have relaxed the deadline for users to accept the new policy, but it will still be enacted. This was confirmed by sources with intimate knowledge about WhatsApp’s future plans. It will still be effective from 15 May for new users and for people who have already accepted the changes in the company’s policy. The only difference is that anyone who does not accept the policy now will not immediately lose entire functionality. Instead, they will simply be shown a reminder to accept the new policy when using the app on their devices.

However, this will change after a period of several weeks, as the reminder will become what WhatsApp is commonly referring to as a “persistent reminder.” At this point, the app’s functionality will be limited. Users will still be able to answer incoming calls and respond to messages by clicking on notifications, but they will not be able to access the standard chat list from within the app. Finally, after a few more weeks, users will lose even this “limited functionality” completely. According to the company, accounts that have been inactive for more than 120 days are automatically deleted.

One of the main reasons behind WhatsApp’s decision to extend this deadline could be that the new privacy policy has received a lot of criticism from not only users and privacy activists, but even the Ministry of Electronics and Information Technology (MeitY), which stated that the new policy was invasive and that it enabled WhatsApp and other Facebook group companies to make gain precise information about users.

This led to a small group of WhatsApp users downloading other instant messaging apps such as Signal and Telegram in early January. Meanwhile, others simply deleted their WhatsApp accounts. However, the company has maintained that the new policy does not impact the privacy of personal messages for anyone, and that the extension will only happen because some users have not had the chance to accept the policy changes.