Yahoo Early Days – The King Of The Dot Com Era ! 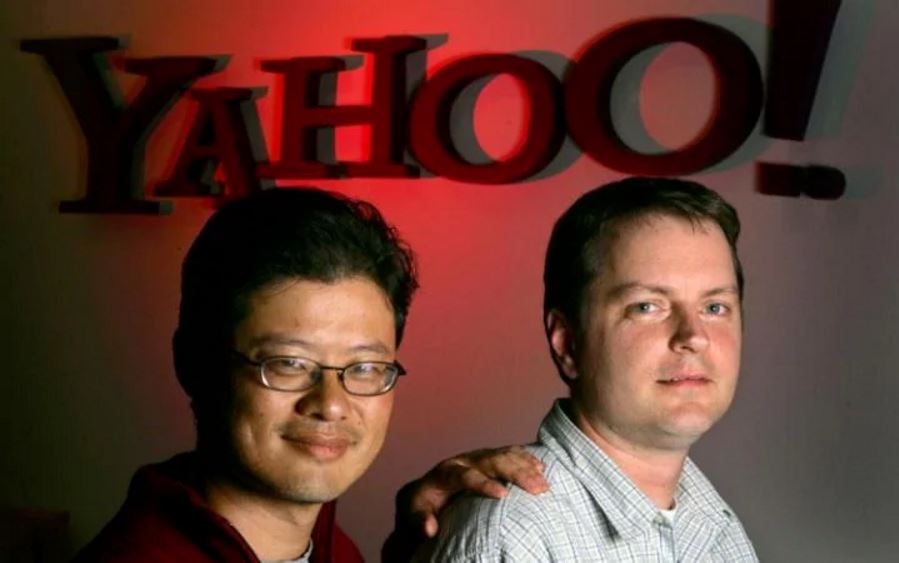 The founders of Yahoo, Jerry Yang and David Filo were PhD students in electrical engineering at Stanford in early 1994. Those days, new websites began popping up every day. The two were very much obsessed with the World Wide Web. The students instead of working on their research for dissertation always spent their time browsing the web, trying to find and catalog new websites. Their hobby was to collect and compile links of the new websites they found into a list.

As Yang’s workstation was connected to Stanford’s public Internet connection, other people could view the list the two were generating by going to the institute’s website. The list was called ‘Jerry’s and David’s Guide to the World Wide Web’ and it proved popular among Yang and Filo’s group of friends. The news spread even further and soon complete strangers were emailing in suggestions of new sites to be included. In order to keep things reasonably organized, Yang and Filo broke the list out into a hierarchical directory.

Yang and Filo had compiled a directory of more than 2,000 sites. What was more impressive was the fact that ‘Jerry’s and David’s Guide to the World Wide Web’ was getting 50,000 hits a day. The pair decided that their project needed a better name. So, Yang and Filo settled on the name Yahoo!, which they claimed stood for ‘Yet Another Hierarchical, Officious Oracle.’

Earlier, Stanford was generous enough to host their website. Then Netscape launched its beta browser late in 1994 and it decided to make Yahoo the default link when a user clicked the “Directory” button on the top menu of the browser. All those early web users who surfed the web via Netscape were introduced to Yahoo as the defacto search utility. By January of 1995, soon after the domain Yahoo.com was registered, Yahoo had grown into a directory of 10,000 sites and was getting more than 100,000 unique visitors a day. The servers began to struggle under the deluge the university asked Yang and Filo to find another host for their website.

Yang and Filo were skeptical if they could make out some business of this. Businesses such as Reuters, MCI, Microsoft, CNET and Netscape all met with the boys to see if some form of partnership or buyout was possible. The hosting problem was solved by agreeing to host Yahoo temporarily on one of Netscape’s spare servers. Yang and Filo took the plunge into entrepreneurship.

Related Read: YAHOO! – Decline of an Empire. Or is it really?

The Venture Capitalists came calling but were a bit skeptical about whether Yahoo could be made a profitable business. Software was something that could be sold, but Yahoo was just a directory, a service which anyone could make. Yang and Filo were convinced and decided not to charge the users for searching.

Yang and Filo incorporated Yahoo on March 2, 1995, and Yang began circulating a business plan, but failed to impress any Venture Capitalists back then. The service was to be free and they didn’t know how to monetize it though there were a million users. Then Mike Moritz of Sequoia Capital came to their rescue. Moritz pitched a revenue model: advertising-supported mass media. Radio and television were free, but both were supported by advertisers who paid good money to reach an audience of millions. Yahoo had an audience of millions, and if the web kept growing at the rate it was growing at, who knew how many hundreds of millions could be reached in the near future?

In April of 1995, Sequoia invested $1 million dollars in exchange for 1/4th of the newly incorporated Yahoo. By early 1999, Sequoia’s initial $1 million was worth $8 billion. Yahoo bought 1,500 square feet of office space. Engineers were brought on-board to help Filo setup Yahoo’s servers and technologies in-house. Finance people were brought on to structure Yahoo. Tim Koogle, a veteran of both tech startups and the tech establishment was brought in to be the CEO. New staff was hired to make a team of professional web surfers who would help build out the Yahoo directory. The surfers, who would eventually number more than 50, were expected to each add as many as a thousand new sites a day to the directory. Yahoo! was a human-powered directory for the web, not a “search engine.”

In order to stay ahead, Yahoo decided it would brand itself. Karen Edwards was brought on to direct Yahoo’s marketing efforts. She advertised Yahoo on TV and radio so much that Yahoo! became popular even among those who didn’t knew what internet was. The branding and the advertising efforts were paid for by additional rounds of venture capital investment.

Netscape and other companies started going public. This, apart from raising fund would generate an incredible amount of free publicity to be gained by a successful high-profile IPO. Yahoo went public in April, 1996, selling 2.6 million shares. More importantly, this made Yahoo’s market value $850 million, which was more than that of others.

Advertising was the obvious business model for any website that wanted to remain free for its users. At the time, Yahoo liked to give the impression that it came to the advertising model reluctantly, but there was no other feasible option. Yahoo’s original business plan called for limited advertising as a way to monetize Yahoo’s growing traffic. By the fourth quarter of 1996, the website could boast 550 advertisers, including many Fortune 500 companies such as Wal-Mart and Coca-Cola.

By 1997, the online advertising market neared $1 billion, and Yahoo alone was estimated to control 7.5 percent of the total. Yahoo’s stock rose accordingly, jumping 511 percent over the course of 1997. The company at that point had a market value of almost $4 billion. The world would come to think of Yahoo as one of the leaders of the new Internet era. The company head count reached more than 400 people. This explosion of money, people and traffic lead to the further increase in office space, hardware and computing power.

Foreign versions of Yahoo’s site were launched in Asia and Europe. Yahoo purchased a company called Four11 turned its service, RocketMail, into Yahoo Mail. As e-commerce was predicted to grow as quickly, Yahoo launched Yahoo Shopping. Yahoo Shipping was made possible via the purchase a small company called Viaweb. Yahoo also purchased Geocities and Broadcast.com.

Similar Read: Why Yahoo Failed? From The Eyes Of A Loyal User !

By 2,000, Yahoo was considered one of the most powerful companies of the dot-com era. Like everyone else in the tech world, the bursting of the dot-com bubble lead to difficult times for Yahoo. But after that, Yahoo again rose and then it went through many ups and downs. Now, its being acquired by Verizon and being renamed as ‘Altaba’.