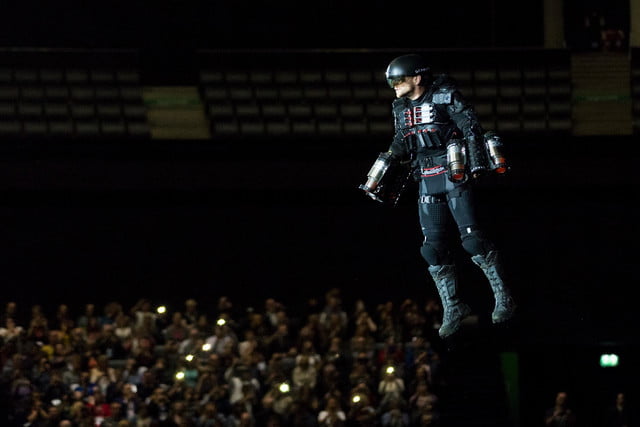 Have you ever waited through the air in an Ironman-style suit like a superhero? Do you have that financial strength of a real-life Tony Spark to along with it? If so, you may want to queue up to pay the amount of $446000 for your very own version of British inventor Richard Browning jet-propelled suit, which recently went on sale at high-end department store Selfridges.
Comprises of five jet engines, a 3D printed structure and a display for showing fuel levels, it is one of the closets you will get to life as a true comic book hero.

Previously, there was a report about the Gravity industries flying exosuit project at the beginning of this year. Moreover, inventor Richard Browning noted that plenty of upgrades which have happened since then. “A huge amount of modifications have happened since 2017, learned from flying at events,” he told Digital Trends. “We consolidated the two rear engines into one large one, improved efficiency and power, made it smaller, and changed the geometry of the arm mount in a way that’s made a dramatic difference to stability.”

Browning said that no license is needed to fly the suit (although, if you’re going to spend your kid’s college fund, you probably need to write permission from your spouse) and that training takes just a few minutes. “We’ve had a pilot with five minutes’ training who managed to hover untethered very happily,” he continued. “A lot does depend on fitness level and aptitude, but you don’t have to be a superhero or superhuman to fly it. It taps into an innate human balancing ability in a uncanny way, so it’s extremely accessible.”

As to whether it will be accessible to those of us who have not founded startups which is worth seven figures and even can’t afford to eat gold encrusted lobster for lunch? Browning said. “Inevitably, the cost will come down. We’re also working on an electric version which will be vastly more accessible. So watch this space.”