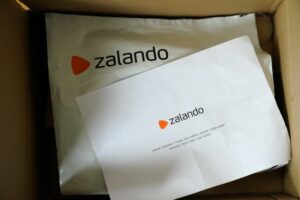 Zalando expects a return to growth in the second half of this year, after a weak second quarter.
Source: Yahoo News

This week, retail giant Zalando went on to report a massive drop of 58% in its operating earning for this year’s second quarter. On August 4, the fashion retailer announced the drop in its sales and profits, but added how it expects to bounce back to growth and improvement in profits in the coming half of 2022.

The entire portion of the merchandise of the online retailer appeared flat at 3.8 billion euros in this years second quarter of this year. The drop is clearly significant, where sales saw a drop of 4% to 2.6 billion euros, in comparison to the second quarter in 2021. Additionally, the EBIT- adjusted operating profit fell from the figure 184.1 million to 77.4 million euros. However, it reported a rebound from a loss of 52 million euros which it faced in the first quarter.

Moreover, the retail giant announced the reasons that led to the loss they faced in the last quarter. These included the evident inflation, a drop in consumers’ confidence, supply congestions that demand came in contact with following the pandemic, which aided in it recording a fruitful annum last year.

This week, Robert Gentz, the co chief executive officer of the company addressed this particular concern. He stated how life for consumers is growing to be increasingly expensive, leading to the reluctance of consumers to continue purchasing. He expressed how Zalando had gained a sense of the situation through the changing situations.

Statement from the retail giant:

Following it addressing the inflation, the European retail giants noted how there was an increase in the level of its active shoppers, which was 11%, coming to about 49 million euros. Moreover, this was while the membership to Zalando’s loyalty programme ‘Zalando Plus’ grew by a whopping 164% last quarter to over 1.5 million. In order cut costs, the online retailer stated it had set reductions in marketing spending. Along with it, it had come up with a minimum order value, and was making improvements to efficiency throughout Europe’s logistics network.

Sandra Dembleck, the Chief Financial Officer of the European retailer stated how Zalando has put its focus on ‘efficiency’ and steps on ‘margin improvement.’ This would aid the company to boost their gains in the next two quarters this year. Further, it provided confirmation for a drop in guidance in the month of June, predicting growth in sales from 0% to 3%, along with an adjusted EBIT to 260 million euros from 180 million euros. In pre marketing trading, its shares were shown to go up by 1.7%.