Zuckerberg’s Meta logo is look like an app called Migraine. A Berlin-based health startup has taken a dig at Meta over its logo.

The Social Media giant Facebook, now Meta had rebranded and changed into Meta last week.  Along with the name, the company revealed a new logo. It seems with its logo, Facebook may now be stuck in the new issue.

As it is clearly seen in the design of the social giant, Meta, and this health firm, M-sense is quite similar to the sign of Infinity. The only difference is the colour of the logo. 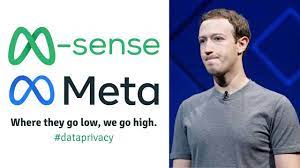 The company said in their tweet, “We are very honored that Facebook felt inspired by us and the logo of our Migraine app. Maybe they all get to get inspired by our data privacy procedures as well,”

We are very honoured that @facebook felt inspired by the logo of our migraine app – maybe they’ll get inspired by our data privacy procedures as well 👀 🤓
#dataprivacy #meta #facebook pic.twitter.com/QY7cota36r

The company also take the fun on Mark Zuckerberg and advised him to download the M-sense which will give him relief from headaches caused by the rebranding process.

We’ve been told this rebrand to @Meta is causing Mr. Zuckerberg a big migraine — we can help! Just download our app 😘 #facebook #meta #migraine #migraineapp pic.twitter.com/aN5P3VFk47

However, the good thing for Facebook is, this health app will unlikely take any legal action against Meta. In their reply to a Twitter user, it is clearly seen that.

We didn’t say they stole it – we said we feel honored to have them inspired 😊.